O HAI. So the Con-SARS/plague/crud/deathbeast/whatever hasn't gone away, but I was back at work today, and after a few gallons of Starbucks Berry Chai (good tip, Heidi) and several dozen rounds of "Sunny" on repeat (seriously, it's like 2 minutes and 43 seconds of DayQuil a pop), I'm ready to share some tales!

1) My official round-ups of several Marvel/DC panels are here, the second, third and fourth news bullets. They're briefer than the Newsarama/CBR play-by-plays, but it's a different audience. And you've probably already read those. I'm not going to go into them here, beyond what I already said about DC Nation below, which has so far been the universal assessment. Marvel pretty much won this one hands-down, except I will say for the news that the Rucka/Williams Batwoman comic I was so worried would be some kind of placating mini is actually going to be a big long starring run in Detective Fucking Comics. So let's all raise a big hallelujah to that action.

2) The beard has definitively replaced the goatee in fanboy facial fashion. Which of course was replaced by bare skin in non-fanboy facial fashion about ten years ago, but you know whatever. Ok I take this back. With heightened awareness I did a little anthropological observation on my commute today, and unless 85% of the 25-42 year-old males in Manhattan read comic books, beards are apparently making quite a comeback in general.

3) Did I mention the Wonder Woman movie? Yeah, go buy it on March 3. It's tremendous.

4) The Beat's Art of Storytelling panel on Sunday was fascinating, especially for those of us who consider ourselves creative in some ways but do not at all get the kind of ideas that come to the minds of gifted creators (note I am speaking for myself, not Aaron--he gets those ideas all the time, he just needs to write one down some day). Moderated by Heidi MacDonald, it featured Marv Wolfman, Jim Lee, Carla Speed McNeil, Ben Templesmith and Terry Moore, so you know, people with big, crazy, awesome story brains.

5) Alright Lost is on now and I'm coughing up my spleen, so I'll give you the rest in some not-very-artful pictures: 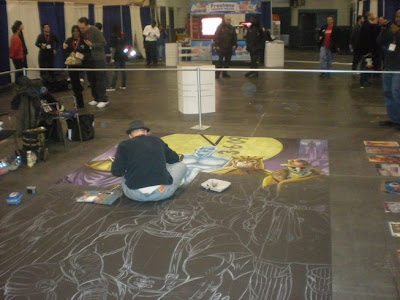 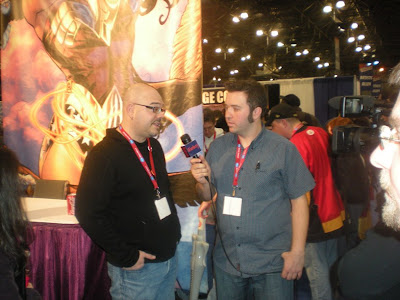 The endlessly prolific Greg Rucka giving an interview to iFanboy's Ron Richards (whom I've spent more time talking with about Morrissey worship than comics, which is saying something) 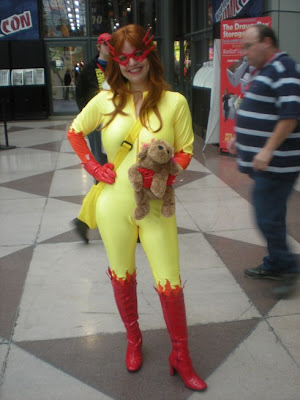 Yeah you know I had to get Firestar's picture for Aaron, stat. She even has a Ms. Lion doll! (And did you hear? Ms. Lion is going to be a Pet Avenger!) 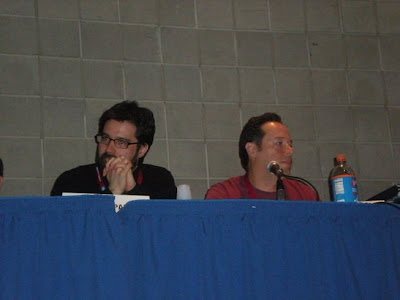 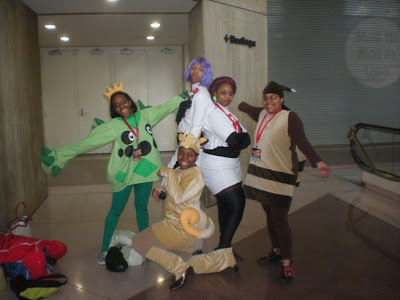 The girl in the Jessie outfit handmade these Team Rocket costumes (even though Team Rocket doesn't have a Furrett), and they made my day. 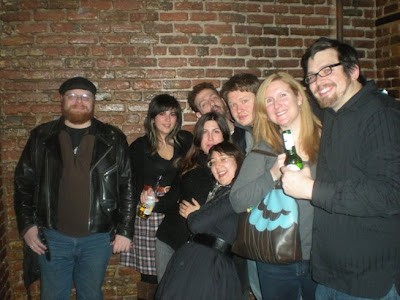 If you're going to go to karaoke at Sing Sing, get there early so your song wait time isn't three hours, which is too much. Laura knows this, and well. (From left: Popgun Vol. 3 co-editor Adam Knave, a girl whose name I didn't catch so sorry, the ubiquitous Jeff Newelt who took a knock-out turn on Shaggy's "Angel," Laura Hudson of Publishers Weekly/Comic Foundry/MTV.com/etc., Laura's friend Valery which I keep wanting to type as Valkyrie, Popgun co-editor Mark Andrew Smith, oh hi, Image Comics PR/Marketing emperor Joe Keatinge, who came down with the plague that Aaron and I are just now getting over about an hour after this picture was taken on Thursday).