Since Evie's not feeling so well and has a full day of crap ahead of her, I figured I'd help out and post the pretty pictures, since I know how to do that. If you make clickings, they get bigged.

And here's my cover, the variant for Skrull Kill Krew #5 written by my friend Adam Felber, who needs to send me an e-mail next time he's back in New York. Cover by "Rocafort, Regler, and IF's Prianto." (who can also fight for your rights if you've been injured on the job or in an auto accident.)

Here's Evie's panel of the week, from Beasts of Burden #2 written by Evan Dorkin, art by Jill Thompson. And would it KILL you two to put in more cats?

And my panel of the week, from The Stuff of Legend #2 (which you can get here if your shop didn't pick it up) written by Mike Raicht and Brian Smith, art by Charles Paul Wilson III.

And, as promised, here's Italian Spiderman.

Sheep pictures will follow. (get it? that's what sheep do.)
Posted by Unknown at 12:05 PM 4 comments: Links to this post

I am working late and getting sick, so I'm going to put off the visual aids until tomorrow night, but the new episode is up here or in the right sidebar. Kisses.

This episode of Awesomed By Comics is brought to you by the Valley Shepherd Creamery, where we met some totally badass sheep who totally wanted to hang with us for more than our snacks. Speaking of domesticated animals, Evan Dorkin and Jill Thompson's Beasts of Burden wins our hearts, as does Power Girl's cat, and her trip to IKEA. Chew holds onto its title as the Surprise Hit of the Summer well into October, and the new run on JLA, hopefully off a steep cliff, begins. Please be sure to download the War Rocket Ajax Halloween Special this week, where we are delightful, or at least shrill, special guests.

This episode of Awesomed By Comics is brought to you by tea, zen and scalding all over your lap. Incredible Hercules shines in ball-kickin', nipple-twistin' onomatopoeic glory, and Mike Carey's awesome The Unwritten makes no sense in the best possible way. Deadpool and Spider-Man mini-story anthologies get points, and Batgirl starts to begrudgingly meet our requests, while also demonstrating DC's sore need for good teen-themed pencilers.

Aaron and Evie's pick, from Unwritten #6, cover by Yuko Shimizu: 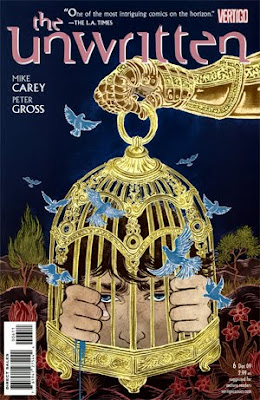 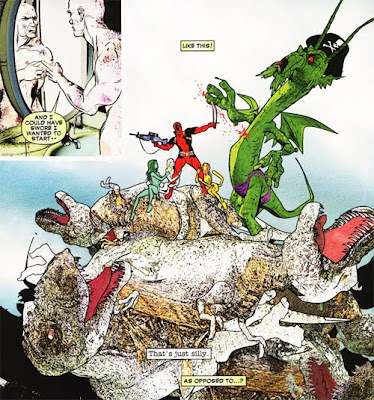 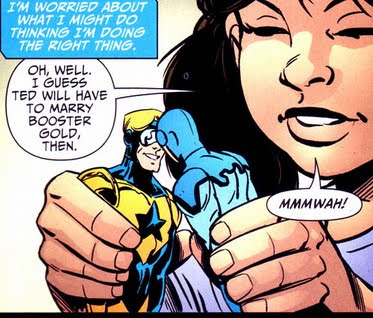 This episode of Awesomed By Comics is brought to you by the latest entry in our rap battle beef war with War Rocket Ajax, and holy cats is it a heartbreaking, dream-making love-taker. Brother I mean Doctor Voodoo works his magic, and the long-awaited wrap-up to Planetary is universally (GET IT?) lauded. A lot of good-guys-turned-bad this week, and WTF is up with that thing that Batman did? That was highly irregular. 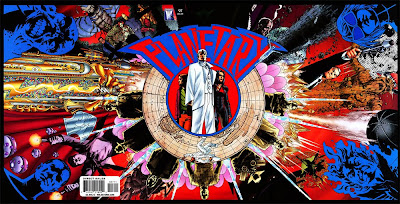 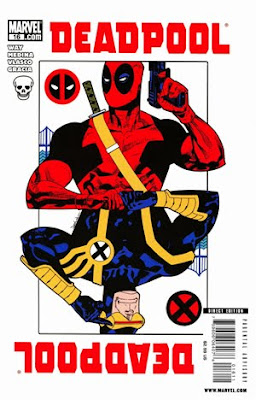 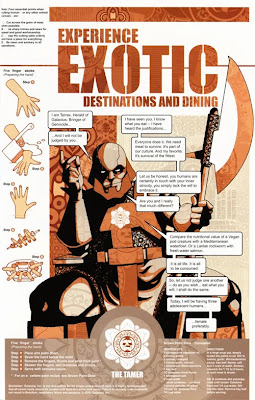 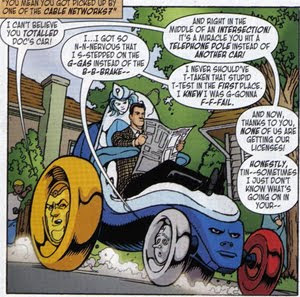 Email ThisBlogThis!Share to TwitterShare to FacebookShare to Pinterest
Labels: ABC Podcast, Cover of the Week, Panel of the Week, Relationships

OH NO YOU DIDN'T

OH GOD DAMMIT. Many apologies, but you all are gonna have to wait until tomorrow night for the podcast, which is/was going to be a GREAT one--the computer just up and COLD DIED an hour-plus into recording and erased everything. I suppose as "professionals" we should keep these things to ourselves, but honesty is best. Anyway, it's late, it would suck if we did it again now, so tomorrow it is. Very sorry, but I promise it will be worth the wait, there's at least one piece of major awesome.

Email ThisBlogThis!Share to TwitterShare to FacebookShare to Pinterest
Labels: ABC Podcast, excuses, Technology makes me sad in the face

So if you've been listening to our podcast, you know something about our rap battle (or "beef war") with the War Rocket Ajax podcast, which has gotten fairly heated, and also not heated at all. Anyway, Eugene's answer to our Wolverine smackdown opens the most recent episode of their show, and holy crap is it a punch in the head. Go listen to it immediately. We're going to have to do something desperate. Like really, really desperate. I'm guessing Aaron has some ideas.

This episode of Awesomed By Comics is brought to you by Asparagus. It will cut you. We mourn the loss of a top-notch Runaways creative team that got cut too short, and marvel (small "m") at the shagtastic thriller that is Herogasm. A very intriguing first issue of Mark Waid's The Unknown: The Devil Made Flesh leaves us wanting much more, and Marvel Divas rends Aaron's heart in fricking TWO. 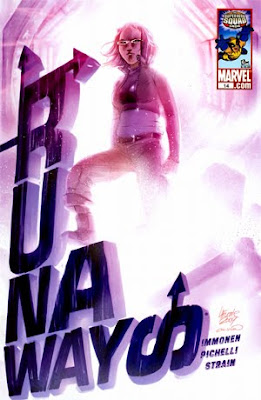 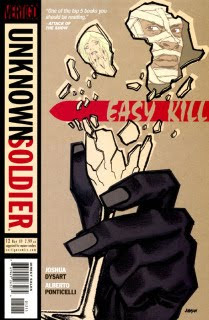 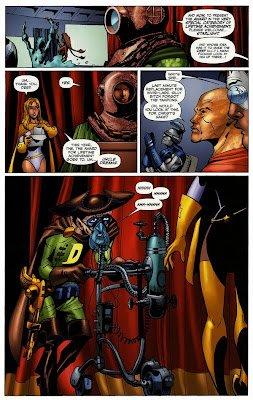 Email ThisBlogThis!Share to TwitterShare to FacebookShare to Pinterest
Labels: ABC Podcast, Cover of the Week, Panel of the Week, Runaways

Indie Comics to Watch Out For!

An autobiographical take of a 7 year-old, left alone in the world when his mother dies of cholera. He spends three years in an orphanage, struggling with his demons, until he loses all four of his limbs in a freak accident. Drawn by Schoonerman using only his teeth, inspired by the style of Bill Keane. "Horribly depressing, and sickeningly melancholy! Four Stars!" - Spinnin' Indies

A 9 year old has to grow up in a hurry when his entire family is killed in a gas tank explosion. While tearfully going through the wreckage of his home, he discovers his mother, father, and older sister had all been struggling with depression, and were all self-medicating through alcohol and drunken fist-fights. Drawn entirely on the backs of discarded Christmas cards, then scanned into book form. "So sad, it borders on unreadable. Best comic of the year!" - Grum Reviews

A desperately lonely middle aged man in a dead-end job with no family or relationship prospects discovers why all his pets have committed suicide. Hein calls it 'George Gately meets Aleister Crowley.' "Even more Heartbreaking and miserable than 'Open and Shut.' Chuck has outdone himself this time!" - Books R Good

An 8 year-old girl watches her mother fall apart, trying to come to grips with an abusive relationship. Drawn in Endive's trademark stick figures, this book is entirely without dialogue or narration. "Virtually incomprehensible, yet I know if I were to understand it, it would make me very very depressed. Comics Perfection!!" - Ditto Comics

An 8 year-old boy is dying of dysentery in 1930s Brooklyn. ZacK takes us through the last eight and a half minutes of his life, one page per second. Scribbled into ZacK's arm with loose staples, one panel at a time, then meticulously photographed. "This is by far the saddest book I have ever read, and I have blinded myself with acid so that it will remain the saddest book I will ever read. Sad, Sad, Sad, Sad. Capes are for babies, THIS is what cartooning is all about. One Hundred Stars." - Stanley Littleman, 'Broken by Life; A Homosexual Iguana's Tale'
Posted by Unknown at 11:26 PM 1 comment: Links to this post

This thing is tonight at 7 p.m., go to there! Me, Aaron, Douglas Wolk, Heidi MacDonald. Heidi predicts it will be fierce, I'm guessing closer to really good brunch, but you won't know unless you come.

MoCCA invite you to join us for a conversation about the comics press. What is the role of comic reportage today? What gets covered and why? Find out at this discussion with comics critics and reporters Heidi MacDonald, Aaron McQuade and Evie Nagy and Douglas Wolk and find out the answers.

Heidi MacDonald has edited award-winning comics for Disney, Warner Bros., and Fox. She is currently the editor and main writer for The Beat, a blog covering comics as they relate to pop culture. It was named one of the “100 Greatest Websites” by Entertainment Weekly.

Aaron McQuade and Evie Nagy are husband and wife co-hosts of the weekly podcast and pseudo-awards show Awesomed By Comics. In addition to writing about comics for Publishers Weekly and other publications, Evie is a music journalist and editor at Billboard Magazine; Aaron can be heard hourly as a radio news anchor and producer on Sirius XM.

Douglas Wolk writes about comics for the New York Times, Publishers Weekly, the Washington Post, the Believer and elsewhere. He’s the author of the Eisner- and Harvey-winning “Reading Comics,” as well as “Live at the Apollo.” He lives in Portland, Oregon.

Posted by Evie at 10:28 AM No comments: Links to this post