This episode of the Awesomed By Comics Podcast is brought to you by Skullkickers #6, in stores now from Image Comics, and if I knew how to make animated gifs, I would make one that just flashed SKULLKICKERS #6 IN STORES NOW and had muppets. Our good friend Chris Sims (author of the first story in the aforementioned Skullkickers #6) sits in for Evie, who just presented a paper on Gene Simmons at a music academia conference in LA, and I am told it went "good." This episode is a true celebration of comics, which includes men of iron, fists of iron, girls of power, men of power, jims of gordon, roller disco, and a whole lot of mourning, including some of our own for the passing of beloved creator Dwayne McDuffie.

Download/subscribe to the show here or in the right sidebar, and leave an iTunes review! Tell us what you think in the comments, and feel free to suggest your own winners for our categories. Also if you've ever considered supporting the show, this would be the time to do so with a donation of your choosing over there at the top of the right sidebar. We promise about 92% of it goes to cats like these: 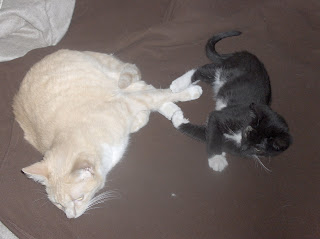 Actually, it has gone to exactly those two cats. This one .... 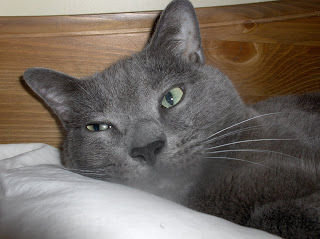 ...hasn't gotten squat - although he deserves to be left out, because as this mouth-area smudge proves, he clearly licked my camera lens when I went to go get some water.

Covers and stuff later, but here's this which I knew was my panel of the week the second I saw it. 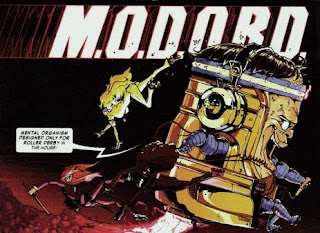 Cover of the week: Amazing Spider-Man #655. Kind of like the DC comic covers except a stylistic choice and not overused.
Hero of the Week: Max Damage in Incorruptible #15, for being awesome and not freaking out at the paradigm at all.
Villain of the Week: Jim Gordon's creepy ass son in Detective Comics #874.
Panel of the week: When Gordon opens the door of the bathroom at the end of the first story of Detective Comics #874
First or Last Book of the Week: Amazing Spider-Man #655 for the start of a brand new arc with Marcos Martin.
Book of the Week: Morning Glories #7 for finally delving into some backstory on the characters and just being craaaaaaazy Spencer work the whole time.

The Barbara Gordon thing is a Crisis-on-Infinite-Earth caused continuity error. In pre-crisis Barbara was the daughter of Jim Gordon of Earth-1. The problem came, probably unintentionally, with Batman: Year One, which (among other things) made Jim Gordon somewhat younger (originally he was already Commissioner when Batman started out), one plot point was Gordon's wife giving birth to their first child, a son, during the year Batman first appeared. This meant that Barbara was now too old to have been Gordon's daughter, and she was first retconned to be his neice/adopted daughter and then re-retconned to his secret biological daughter. It's kind of like the Legion retcon in that it was sort of intended never to be talked about again, but there are a couple of Legends of the Dark Knight stories including it.

Great podcast, but I think my favorite part is at the end when Chris claims Aaron and he disagrees about everything and Aaron then disagrees with him.

In ironman 2.0 (don't get why it's not called Warmachine), I don't think that woman was his ex wife (need to reread it again to be sure) but I beleive it has to do that the crazy inventor guy was a organ donor, and that woman was in the fist few pages going to surgery. So I think it's that that guys invention, are passed through his organs people now have.
But that's my thoughts, and I could be wrong, untill I reread it to be sure.

Zartan Totally reminds me of Ozzy.

LOL at angry anon secrets. However, I can kind of see the logic with the suggestion of piracy. I mean, you said you buy books for the podcast you wouldn't buy otherwise, so it's a cost directly associated with the podcast and a sale that the companies could not otherwise depend on. It's not a ~favorite book~ that's going to get cancelled without your purchases, it's a book you're buying just to review it. Not advocating piracy of course, just that I can kind of see where that come from.

Great episode. Obviously Evie+Aaron is the defacto awesomest team on this show...but Aaron+Chris gives that a run for its money and is easily the best guest team. You guys should totally team up more!

I'm not fussed as to whether donated dollars goes to chopping off the cat's bollocks or bathroom powder (er ...) or whatever - if a few quid I donate goes directly to buying comics, or a new microphone, great. But if your buying these without donations means there's less cash for living expenses, such as ensuring kitty doesn't get to spray, that's not great. We can choose to donate or not - and what's a small donation for a regular dollop of ABC?

Conveniently, money is fungible. I haven't donated because I don't have the money, but since I don't get the impression that you guys and Chris are doing these podcasts while snorting cocaine mixed with ground up copies of Fantastic Four #1 I don't think you really need to feel like you need an accounting for that money. After all, I'm assuming its less than you spend on food, and if you starved to death you couldn't very well do the podcast, could you?