This Labor Day episode of Awesomed By Comics is brought to you by trying not to labor very hard, and also the US Open. And speaking of laboring, Taskmaster #1 is awesome. Other accolades go out to One Month To Live, Last Family of Krypton, Secret Six and Black Cat, while things related to hell are burning out their welcome. Aaron is obsessed with a new video game, and Evie saw lots of half-naked Iggy Pop this weekend, which she forgot to directly mention on the actual show but now you know.

Also, because we are dumb and forgot to link after we discussed them last week: here are webcomics Awkward Zombie and The Abominable Charles Christopher. 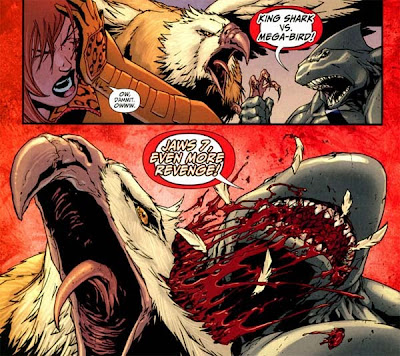 Aaron's pick, from The Boys #46 by Garth Ennis, Russ Braun and Darick Robertson: 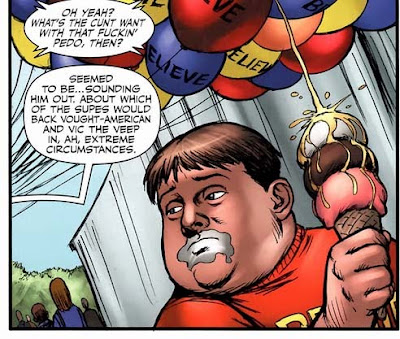 Email ThisBlogThis!Share to TwitterShare to FacebookShare to Pinterest
Labels: ABC Podcast, Cover of the Week, Music and comics, Panel of the Week, Secret Six

Giganta was actually dating the deceased Ryan Choi, who's death was ordered by Dwarfstar, the little shrinky dude on Bane's Secret Six team. Prior to this, Dwarfstar was seen keeping Ryan's body in a matchbox.

Which means we'll probably see Giganta punt him into the stratosphere sometime soon.

This is why we need our listeners, to fill us in when we don't do all the homework. Thanks Colt and Michael (he posted a correction in the last post)!

I guess this issue of Secret Six probably takes place before that though. I mean it would be odd if she just hadn't heard that he was dead, right?

We have been showed the formation of Bane's team. As I recall during the last arc Bane wanted to take another job, while Scandal wanted to go looking for Catman. Ragdoll, Deadshot and Alice sided with Scandal. Jeanette (is her superhero name supposed to be Banshee?) sided with Bane and he recruited the rest. Looks like he was hired by Spy-Smasher to invade the Savage Land or something.

I think Giganta and Ryan's relationship was kind of an on/off thing, where they weren't necessarily seeing a whole lot of each other. So it's possible that he died, and she just hasn't found out yet, due to her globe-trotting adventures.

But more importantly, this seems like the perfect place for Simone to put a little endcap on Ryan's story, and his relationship with Giganta. It seems like something she'd want to address, after investing so much time into the characters.

And Evie, just wanted to say that I'm currently binging back through your shows, and really enjoying them. My boring job gives me plenty of time to listen to my Mp3 player, and listening to ABC really helps pass the time.

I also just bought Aaron's album off Amazon, and really dug it. Good times all around.

Yay, thanks Colt! And super thank you for buying Aaron's album, tell your friends!

That land that the Secret Six are invading, I think is the same land from the comic book "The Warlord"

I think your show's humor level rises in direct proportion to the lack of sleep level.

Thank you for calling out the weirdness in Young Avengers Children's Crusade. Everyone was saying how great it was but I was more WTF about it. What the heck was a Wanda robot just wandering around for in the first place? And no one noticed it until it got hit by a stick by Quicksilver, who for no reason just turned around and started throwing things at Magneto?!?

And I'm sorry, but I am always so confused by Secret Six. I'm not a DC reader, and none of the characters are familiar, even though I've been trying to get into it because you guys seem to like it. Catman is the only character I think I "get" because he's been A) allowed to be showcased and B) he's recognizable both in and out of costume. Frankly, some of the girls are quite interchangeable and therefore dismissible.

But fun show as always!

1. Reggie is not a "second tier" character! He's a member of the Archies! Archie, Jughead, Veronica, Betty, and Reggie are the band, and that makes them the "first tier" of the Archieverse.

2. Warren Buffett has already promised that the bulk of his estate will go to the Gates Foundation when he dies, so they do take donations from outsiders, even if they are already the richest man in the world.

Also, so today is the only day this week that I can go to the Comic Book Shop. I know that the new books won't be there, but there are still some things I want to get.

And yet, I know that if I go today, everyone will stare at me and say, "You know, the new books don't come in until tomorrow," and I will feel the obligation to defend myself. Knowing that this will happen, I am leaning towards just skipping this week.

What I did find really dumb in Young Avengers, was the bit where Magneto puts a bubble around Wican and Speed, starts flying off. Then he his stopped with someone saying "you can't kidnap them!" fallowed by Magneto going "Oh well they have the choice to come with me."
.....What? that makes not sense.
Plus it was kind of dumb to have Quicksilver just throw random things at one person, but have no aim at all to where it could kill many people.
That what I found dumb about this book.

That's a good point - if that Wandabot HAD been just a regular old ridiculously hot gypsy woman, Quicksilver would have thrown a damned stake right through her.

I think that Children's Crusade was extremely good up until the last two pages. Before that I liked everything except the recurring Marvel phenomenon of the opinion spectrum in the Avengers and X-Men running from 'sadly accepting of the neccessity of killing Wanda' to 'callously eager for the opportunity to kill Wanda'. But that doesn't seem to be so much Heinberg as the general Marvel universe. But yeah, the ending would have been better served with a single blank page that said "We think we've done enough initial characterisation, and we're too lazy to write a proper detective story. They figured out that Doctor Doom has Wanda."

Ehtan, that's the best explanation I have heard to justify the ending of CCrusade #2. Not that it makes it better, it just explains a lot.

Did you guys notice that Greg Land is now referred to as "Greg Land, Inc."? Check this link out: http://marvel.com/catalog/?id=17155.

That...is ridic. I think we might have a little "corporate sponsorship" this weekend, you know?

What was the name you guys came up with for Greg Land's side-kick? I remember thinking it was hilarious but I can't remember what it was. In any case, I think we know who the CFO is.

Uhh... we can't remember Greg Land's sidekick. But I'm sure it was hilarious.