This freshman-level episode of Awesomed By Comics is brought to you by LeBron James, who, after a tortuous cost-benefit analysis, has accepted our offer to produce our show from Florida (suck it, War Rocket Ajax). A giant litter of adorable cartoon dalmatians goes out to Sweet Tooth, Secret Six, the Boys; first issues of Scarlet, Avengers: the Children's Crusade and Thor: The Mighty Avenger; and the final, moving issue of this volume of Demo. We also talk about Louis C.K.'s fabulously awkward new sitcom, and the Fantastic Four's answer to Planned Parenthood.

Evie and Aaron's pick, Sweet Tooth #11, cover (and everything else) by Jeff Lemire: 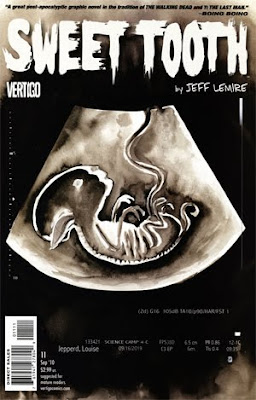 Panel(s) of the week

Aaron's pick from The Boys #44, by Garth Ennis and Russ Braun:

COMING TOMORROW I'M GOING TO PASS OUT NOW.
Posted by Evie at 12:10 AM

Email ThisBlogThis!Share to TwitterShare to FacebookShare to Pinterest
Labels: ABC Podcast, Cover of the Week, Panel of the Week, Secret Six

The implication of the Edward Norton letter wasn't that he wasn't good, but that he wasn't a "team player". Still dickish, but less obviously false. There's a pissed-off response from Norton's agent about this. I think I'd count this as the first real chink in the armor of the Marvel film initiative since the Daredevil/Elektra movies.

Oh, and I was going to ask if you guys picked up X-Women, but since Aaron was capable of doing the show, I'm guessing that's a no.

I dunno, the ads in the back of Shadowland made him look pretty dead... and it's one of the most justifiable actions that Daredevil could take that'd also make him a 'villain' to the other heroes.

New intro's rad, but since I listen to your podcast right before I go to sleep, I am missing the old lullabyish outro music. Was that from an actual song, or just created for the show?

Battlecat: both and neither--it's a song that Aaron wrote, not just for the podcast, but it's the only place you can currently hear the recording.

This is my third ABCP and I have been awesomed by each one. I will download and listen in perpetuity.

By the way, I also figured out the twist in Spider-Man and I thought it was a good use of Kaine. Dead dead dead, but heroically.

I think Bullseye is meant to be dead for reals (for now at least), because I heard something about an upcoming Bullseye one-shot called Funeral for a Fiend. Which is sort of lame and funny in equal measure.

As someone who grew up in Miami in the 80's, 2 Live Crew was the soundtrack of my youth (and I am listening to them on YouTube as I write this).

For crap of the week, I'd have to say the writing (not the art) in Batman: Odyssey is a must avoid. This book reads like it was written in 1972 (and not in a good way). Save your money and get Scarlet #1 instead!

Seriously, I know this is all I talk about, but Thor and the Warriors Four is AWESOME.

Photos from fashion week revealed that Temporal Abortion is the new black.

Oh, and I am also in agreement on the "too many comics" comment. There's not enough talent to go around. Time to thin the herd.

Comics? Oh yeah! Sweet Tooth and Secret Six continue to kick ass. Nice solve, Aaron, on the Kaine reveal.
I'd recommend Casanova; trippy but rewarding, and the art is gorgeous. Do either of you read Pokemon D&P Adventures (of which Vol. 7 came out last week)? My son's already read it twice.

For those about to jazz, we salute you! [/jazz hands]

gotta agree with deworde, thor and the warriors four has me crossing my fingers so hard for an awkward teen horse-thor miniseries

Thanks so much for the kind words guys! In a bout of mutual admiration society, I congratulated you on 100+ episodes this week on our show.

And anytime you want me on the show, you just need to ask a brother.

You're not Shaq Galifinakis, you're Jason Wooooode!
I was here to post that Jason had shouted out ABC at the end of the latest marathon 11 O'clock Comics podcast, but of course Wood beat me to it. He did neglect to mention that Neseman slept through that part of the show, which was awesome.

Picked up the finale of Grim Hunt today; can't wait to hear A&E's thoughts on it.

A week behind in comic reading and therefore in my ABCP listening hence the post on last week's show.

The problem is not that there are too many comics to read. The problem is that they cost too much. $4 for one lousy comic? That is not a good value. I do periodic purges, but ususally I purge comics I've gotten bored with, now I'm purging books I like, but just aren't worth what I pay.

Discussion question- when you get your weekly stack of comics what order do you read them in? Do you start with the ones you're most looking forward to and then read the ones you don't anticipate being awesomed by or do you start with the non awesome and then work your way up? I have been struggling with this for years and I've yet to hit upon a formula that works for me.