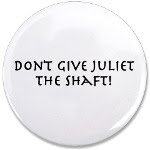 I'm guessing that a decent fraction of you folks are fans of Lost, yes? Seeing as so many comics creators are involved and such. I did a slightly insane thing, which was start to watch the show this season without ever having seen it in the past nor Netflixing past episodes to catch up, a feat that many said was foolish in the extreme. But the thing is, while everyone else has six trillion loose ends that they're frantically killing themselves to tie up, I have, like, eleven. So it's just lovely.

Anyway, that is not the point of this post. The point of this post is to let you know that after the finale last week when (SPOILER) Dr. Juliet heroically fell to her doom and then carried out Daniel's dying deed by banging on the H-bomb core with a rock in hopes of undoing the entirety of this nasty business (I'M SO SURE IT WILL ALL WORK, RIGHT), my dear friend Jessica has taken up the cause of Juliet fans everywhere by opening this Cafe Press store.

I know that not everyone is Juliet's bitch the way that Jess and I am, but look at the name-takin' stud she turned Sawyer into, and compared to Kate she's the empress of the universe. And then there's always this. So show your Juliet love and add to Jessica's son Henry's college fund, or whatever. Henry is really, really cute.

Email ThisBlogThis!Share to TwitterShare to FacebookShare to Pinterest
Labels: Lost

I have only seen pieces of this show a handful of times, and I have only the most rudimentary of understandings of what exactly is going on at any moment, and while I do know the names of several characters, I don't know who exactly they are. (I think "John Locke" is the Bill Murray/Kevin Spacey hybrid guy, but I'm never 100% certain)

That said, if Juliet is the blond lady, which I'm pretty sure she is, she is easily the most annoying character from any sci-fi television show I have ever watched, save perhaps split-personality girl from Heroes or Vicki from Small Wonder (who, fun fact, was played by the cousin of a guy I used to work with) which I'm not sure qualifies as sci-fi but whatever.

Anyway, I do not understand how her death could elicit any reaction other than a sigh of relief, but that's clearly just me.

Sorry, she's awesome. And also, she's being directly compared to Kate, who is completely freaking annoying, and whose death I and millions of others pray for every single week. Also also, I had two people in one week tell me I look like her, which may not actually be true but I'm going to pretend. Maybe that's why you want to drop her down a bottomless hole?

I'm sorry, but if you are in lurv with a dude, and you respect his ideas and opinions, and if you're together in some bizarre incomprehensible life-or-death-or-time-travel ordeal, then the way to show that lurv is NOT (I repeat - NOT) to do the exact opposite of every single thing he says, every idea he has, every plan he comes up with, all the time, always, ever, etc.

Now granted, that dude's a moron.

But if she wants him to fall out of love with another girl (who is also annoying, but quite cute) then the way to do that is NOT to think so little of literally every plan he has, that she does the exact opposite, every time, without even discussing it.

All I'm saying is at least pretend you're considering my ideas, even if they're stupid.

I don't know if it matters or not, but it looks like Juliet's gonna be pretty busy with the new "V" remake on ABC this fall. Perhaps we've seen the last of her on the Island...

That scared the crap out of me when I saw it at the Ice Capades.

I paid to see Snorks, goddamnit! Not this scary stuff.

Then there were giant ice cream cones in nutcracker outfits dancing to Beat It.

I wish ABC would remake that.