Oh hiiiiiiiiiiii. Sorry, we've been locked out of the house for the past two years, nine months and 12 days, it was incredibly inconvenient, the cats are pissed. The point is, since the last episode of Awesomed By Comics, we've had another kid, moved, had a combined four jobs and blah blah blah you don't care. The point is, we got away this weekend and bought some comics and recorded an episode to talk about those comics, some of which are new this (last) week, some of which are not, all of which confused us because what is even going on in comics. We don't know when this will happen again, so join us as we struggle through. MISSED U BBs.

Here are May and Elaine, who don't care. 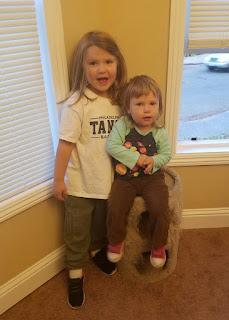 Download the episode now!
Posted by Evie at 1:09 PM

You both still got it. The Flintstones comic is fun.

(haven't listened to new episode yet, I was just happy when I noticed it downloaded)

Viv first appeared in the current VISION solo series, which introduces Vision's synthezoid family. It is *easily* the best Marvel comic of the year except perhaps for SQUIRREL GIRL and you should absolutely pick it up when it comes out in a collected edition early next year.

We missed you so much you beautiful people - thank youxxxxx

Also, your confusion regarding WONDER WOMAN #1 was completely understandable given that you stumbled against one of the butt-dumbest things DC has done in years.

Explaining things like this make me just want to walk sadly away. But I love the content! So I stay and hope to help other people understand.

So glad to see this announcement and download the podcast! I've realized that I have a need to listen to a married couple discuss comics and banter. It has been filled over the past couple of years by Jay and Miles X-Plain the X-Men (and somewhat by Journey Into Misery), but Awesomed by Comics was my first love.

I'm only partway through so far, but I'm already highly amused that you both can't stop talking about your kids when you finally get away from them - something very familiar to my wife and me. And yes, it's much more "challenging" with two. Now imagine three, and you'll understand my life (my youngest is finally school-age).

Was great to hear you guys again! Real blast from the past feels. Oh and there are still some fun comics around, just need to know where to look. Hope you and the family have an awesomed week/month/year/however long until the next episode.

I've always enjoyed u2 on this comic podcast thingy. If I had millions, I'd share just so u could make this a full time job.

Awesome. I check back on the site every now and then, guess I haven't for a few months. Great to have a new episode.

Hey, you guys still do this sometimes!

It's a nice blog you have here.

See what this girl was caught doing with a guy in public!

Really enjoyed my visit to your blog. Beautifully written and the photos were brilliant.