It seems like just last year we didn't put our year-end show up until several days after the year was over! And it was! And now it is again! And again it shall be next year! But from now on, we shall have an always-valid excuse for being late with anything and everything, which is this: 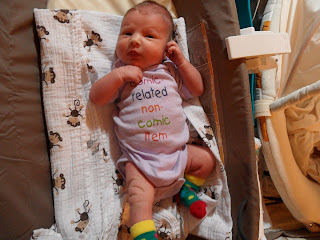 (With a ridiculously huge thanks to listener JR Jenks for the onesie!)
Yes, everyone welcome little May to the world of Awesomed By Comics, joining the cats, our dryer, and our singing Pokemon clock in the ranks of "noisy things we have that interrupt the show". Except it's a lot harder (and far more irritating to the neighbors) to ignore this one. May is celebrating her three-week birthday today the same way she has celebrated every other day so far, and the same way we assume she will continue to celebrate every day for the foreseeable future; eat, defecate, sleep, repeat.
Download/subscribe to the show here or in the right sidebar, and leave an iTunes review! Tell us what you think in the comments, and please always remember that you are more than welcome to list your own winners for our categories in the comments.
As always with these year-end shows, we've got a list of nominee-nominees ... that is to say, things we thought were among the best the year had to offer and were deserving of mention. Of these lists, we've narrowed down each category to five or so nominees, about which we talk at some length, and then from those nominees we pick winners. Some were tough to narrow down (we could have had 10 writer nominees easily) and some were tough to pick enough nominees from to fill out a segment (rough year for compelling villains overall) but here you go.
PRESENTING: The Nominee-Nominees for this year's ABCP Year-End Spectacular!
Hero of the Year:
Tom Taylor (the Unwritten)
Ultimate Spider-Man (Peter Parker and Miles Morales)
Gus (Sweet Tooth)
Stephanie Brown (Batgirl)
Johnny Storm (FF)
Rocket Raccoon (Annihilators backups)
Red Hulk (Hulk, Avengers)
Horny Namor (various)
Power Girl (Power Girl)
Superman (Action Comics)
Cupcake (Bake Sale)
Villain of the Year:
Loki (various)
The Homelander (The Boys)
Bane (Secret Six)
Poker Face (Power Man and Iron Fist)
Satana (Thunderbolts)
The Plutonian (Irredeemable, Incorruptible)
Red Skull (Red Skull Incarnate)
Spider Queen (Spider Island)
The Cabal (Unwritten)
Dan DiDio (SDCC)
Writer of the Year:
Mike Carey (The Unwritten)
Jeff Lemire (Sweet Tooth, Animal Man)
Jeff Parker (Thunderbolts, Hulk)
Greg Pak (Hercules, Alpha Flight; Silver Surfer, Red Skull)
Fred Van Lente (Hercules, Alpha Flight; Power Man and Iron Fist)
Gail Simone (Secret Six)
Garth Ennis (The Boys)
Bryan Q. Miller (Batgirl)
Kieron Gillen (Journey Into Mystery, Generation Hope, Uncanny)
Peter David (X-Factor)
Brian Michael Bendis (Ultimate Spider-Man, Moon Knight)
Nick Spencer (Morning Glories, Infinite Vacation, Ultimate X-Men; Cloak &
Dagger)
Abnett & Lanning (Annihilators; Heroes for Hire)
Mark Waid (Incorruptible, Irredeemable, Daredevil)
Charlie Huston (Wolverine: The Best There Is)
Artist of the Year:
Jeff Lemire (Sweet Tooth)
Peter Gross (The Unwritten)
Sara Pichelli (Ultimate Spider-Man)
Yuko Shimizu (Unwritten covers)
J. Calafiore (Secret Six)
Andres Guinaldo (Gotham City Sirens)
Timothy Green II (Rocket Raccoon and Groot backup)
Juan Jose Ryp (Wolverine: The Best There Is)
David Hahn (All-Nighter)
Emma Rios (Cloak & Dagger)
Travel Foreman (Animal Man)
JH Williams III (Batwoman)
Paolo Rivera/Marcos Martin (Daredevil)
Crap of the Year:
Smallville
Prelude to Schism
Bendis' interview trope
Spider-Man: Turn Off the Dark
Fear Itself
Secret Six ending
Treatment of women by DC in the relaunch
Detective #1
Comic-related non-comic Item of the Year:
Doctor Who
Adam Warrock
Harry Potter 7: Pt. 2
Smallville
Pokemon Black and White
Looking back at the career of Dwayne McDuffie
Spider-Man: Turn Off the Dark
X-Men First Class
Iron Man Armored Adventures
Yu-Gi-Oh 3D: Bonds Beyond Time debacle
Captain America
Thor
Best New Series:
Power Man and Iron Fist
Annihilators/Rocket Raccoon and Groot
FF
Journey Into Mystery
Moon Knight
15 Love
All Nighter
Daredevil
Rachel Rising
Punisher
Animal Man
Action Comics
Ultimate Spider-Man
Story of the Year:
The Unwritten: Leviathan, by Mike Carey and Peter Gross
Sweet Tooth: The Further Adventures of the Boy and the Big Man, by Jeff Lemire
The Boys: Proper Preparation and Planning, by Garth Ennis and Russ Braun - Evie
Ultimate Spider-Man: The Death of Spider-Man, by Brian Michael Bendis, Sarah Pichelli, and Mark Bagley
Secret Six: Infernal Affairs, by Gail Simone and J. Calafiore
Wolverine: The Best There is: Broken Quarantine, by Charlie Huston and Juan Jose Ryp
Bake Sale (Original Graphic Novel) by Sarah Varon
Posted by Aaron at 3:22 PM

She is sooooo freakin' cute!

Just wanted to say congratulations on the baby, she is the cutest thing i've seen in a long while and I browse pokemon imageboards. I hope you guys have an awesome new year with her.

I am so looking forward to this new podcast, you have no idea, but first things first: That may just well be the most adorable 'lil baby I have EVER seen!! And I've seen quite a few growing up, as my mother helps bring them into the world...

I know it's kinda weird for a fan of your show that you have never met who lives clear on the other coast to say this, but I wish you all much love and joy in this next chapter. Savor every.little.second. Even when you want nothing to do but sleep. Every. Second.


Now, I am gonna go grab a beer and get my gay ass to my Podcast Listening Machine! It's ABC Review Time!

Great episode, but what was up with the weird GLADOS voice talking about Oatmeal.

My wife just looked at the picture of May and yold me "I think I might be ready to have one". Thanks alot, May. Now the pressure's on!

I whipped up a black and white preview of everyone's favorite ABCP-inspired horsey hero! Discuss!

The theme tunes for categories...was it not often "Unwell" by Matchbox 20? Um...are you guys feeling all right?

Congratulations on the arrival of May Eleanor (and apologies if I spelt any of that wrong). She's a little Christmas cracker. Give her a cuddle for me. And the cats too!

Hey, how about a nursery style theme jingle?

It's good to have you back. We appreciate the time you sacrifice for us, especially now that you have the baby to take care of. Can I borrow Evie's mom in about a year and a half?
Personally, I like that you take baby breaks and yell at the cats. The people who complain are dog people.

I've never been so happy to make a man cry. Glad you liked the onesie.

Question: Why doesn't Evie sing on an Ampersands track.

Answer: Evie sings on at least half the Ampersands tracks. And thank you.

Answer: Evie sings on at least half the Ampersands tracks. And thank you.

(the above comment is true only if you're one of the five people who have heard the new album. She's on a few songs from the first one though.)

Not to be demanding of two people that are sleep-deprived, but when will we see said album?

Congrats on your daughter! So happy for you both! And happy to see Timothy Green II on your list. He is seriously overlooked. And your Crap of the year is right on the money. Thanks for continuing to do this in the midst of infant arrival. You guys are the best!

Please show some respect for Mr. Pak
If you must refer to him by his first name- at least use the full version of it- Gregulon.

When my wife had our baby back in June, we were both the same way as Evie in being worried that it would change us, and while it's change what we do, and our priorities, and in a very meaningful what's important to us, it hasn't really changed who we are.

You'll find the time for comics again, and I really recommend a tablet of some kind to keep up. It's easier to wipe baby drool off of a screen than it is off of your copy of the Boys.

keep abcp a labor of love. don't push yourselves, otherwise it might turn out shit.

congrats on the baby and thanks for taking the time to do a year in review show.

take care of yourselves and i'll happily wait for the next podcast.

(by which I mean I love that website too. and congratulations!)

Yo Anonymous, chill out. We just had a fucking baby. It takes a while to get your time management down, and that includes reading enough books to make a show worthwhile. We almost did one yesterday. Don't go spreading death rumors, we'll be back.

For the next episode you could change the logo to you and Aaron walking across the street pushing a stroller (maybe add one of the cats so there are stand-ins for all four Beatles), with a license plate including "160IF" in the background.

Ah, cheers Ethan. If you'd mentioned 'zebra crossing' I'd have likely gotten the reference ... but Evie and Aaron will, as musical folk!

Thanks for providing such a great article, it was excellent and very informative.
as a first time visitor to your blog I am very impressed.
thank you :)