This episode of the Awesomed By Comics Podcast is brought to you by some pretty sweet aughts jazz, and the comic book analysis stylings of the delightful Kelly Thompson (from whom you can get lots more here, or here, or here, or here.) And please go get the latest episode of 3 Chicks Review Comics - it'll make us look influential. With Evie out of the country for the week, Kelly and Aaron stage a bit of a "getting to know your taste in comics" marathon, as you might expect from people who have never spoken to each other before, as opposed to people who have lived together for 6 years. Big wins for Wolverine and Jubilee, The Boys, Memoir, and ... Buffy! (Another first!)

Download/subscribe to the show here or in the right sidebar, and leave an iTunes review! Tell us what you think in the comments, and feel free to suggest your own winners for our categories. Also consider supporting the show with a donation of your choosing.

Cover(s) of the Week: 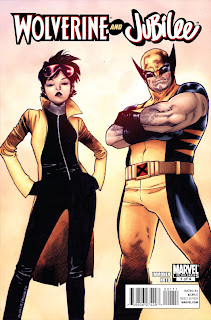 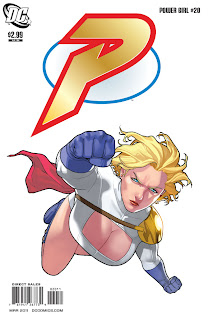 Kelly's Pick, from Batman - Streets of Gotham #19 by Paul Dini and Dustin Nguyen 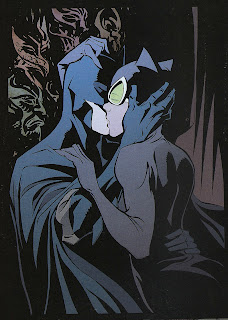 (Aaron's panel is too damn big to put here, but if you didn't get The Boys #50, flip through it on Wednesday. It's the splash page with the two teams facing off.)

Bonus Crap of the Week: 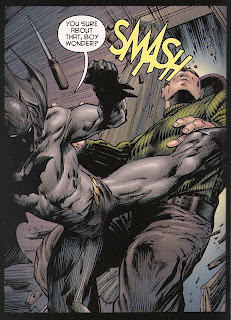 Also, FYI, the issues of Superman/Batman referenced at the end are #'s 51-52 (the utterly brilliant Lil' Leaguers arc) and #78 (the Batman Vs. Superman imaginary battle)
Posted by Aaron at 10:32 PM

Email ThisBlogThis!Share to TwitterShare to FacebookShare to Pinterest
Labels: ABC Podcast, Buffy, Cover of the Week, Crap of the Week, Evie is AWOL, Kathryn Immonen, Kelly Thompson, Panel of the Week, The Boys, Wolverine

Loved all the talk in this ep!

The Tigra thing convinced me not to even bother buying Avengers Academy. As a fan of the character, I'm endlessly annoyed that her stories in the past few years have been: Betraying Captain America in Civil War, sleeping with Hank Pym, getting beaten up by the Hood and Jigsaw in a sexually charged scene, being turned into a mindless slave by the Puppet Master for the implied purposes of prostitution, finding out she slept with a Skrull, having Osborn threaten to force her to abort her Skrull-baby, briefly joining the Avengers Resistance, having a baby, and now having a video of her beating sold by a celebrity porn site.

She absolutely needs a new costume. Maybe that'll convince writers that they can write her as a character with motivations and stories extending beyond her reproductive organs.

What's even more crappy is that the kids are totally right. The Hood's currently wielding the Infinity Gems and smacking around the Red Hulk, and Jigsaw's running around murdering people. She was beaten and humiliated, and was the only one that suffered any consequences.

OMG. Aaron! Why won't I stop talking!? I'm so sorry - I was so chatty! I'm sure it was a combination of nervousness, excitement and "get to know you-ness" but still! Next time you have to tell me to shut up.

Thanks so much for having me - I had a great time.

me again! i actually JUST finished listening to the podcast, heh.

Great Show,
Really enjoyed the costume conversation I had to watch my laugh as I was listening in my cube at work and didnt' want to disturb my office mates. On the Jim Gordon's conversation, it was Gordon's son in the original Year One story. As well James Gordon II is back in the backup for Detective Comics, and it appears there is a reason Jim and Barb never discuss him (You should be reading this it's a great story)

Great show, and why the hell is Tigra wearing a bikini anyways? I say take it off and maybe Marvel will bring more Furries readers

like aways a good episode! but someone has not read Batman year 1 where they introduced Gordon's son.

I have read neither Batman Year One, nor All Star Superman - both of which I intend to correct someday, but have not gotten around to yet.

a lot of the criticism especially from Kelly was directed at female heroines and their costumes.

Now, true, I am male, so I probably have a very different approach to that, but I am also bothered by the treatment of female heroes in comics a lot, especially by marvel. But there are things that would never bother me.

Power Girl's costume. With the "window". Damn sexy and I have no problem with it, because Power Girl is not a damsel in distress. Yeah, she might be in trouble every now and then, but so is every hero. She doesn't need to be rescued most of the time, though, so it's okay for me.

Likewise I love Tigra. I think ehr looks are quite iconic. The bikini together with her fur create something tribal, savage and I don't think that aspect would be obvious when she wore a more "normal" costume.
also thinks like tops not zipped up do not bother me. Maybe "of course" not, because I am male and I maybe love sexy females.

I can understand Kelly's angle with the costumes, but I don't share it. And sometimes? Hell Emma Frost ALWAYS looks to me as if she's wearing lingerie instead of a costume. So if she looks like that in a photomanip or movie? I don't care.

But what does bother me is the potrayal of females throughout the Marvel Universe. Especially in X-Men 1-6 (Curse of the Mutants). Look at who is making the decisions, driving the stories, doing the battles. There are a set of panels, where you see Pixie and Emma clinging on to some male heroes because they need protection oh so badly. THAT bothers me. The fact that it's STILL mostly the males driving the stories.

I really enjoyed the bonus conversation at the end of the podcast. My girlfriend is totally cool with, and even enjoys, sexy sci-fi like Witchblade. However, I recently brought her along to a store and as I was browsing all the usual super hero fare, she picked up a copy of a Jeffrey Brown comic and was totally enthralled by it. Now, I also enjoy Jeffrey Brown (Clumsy is wonderful) but I admit to having the default position, at least subconciously, that comics = super heroes. I think many young men have this in their brains and they should just admit it and then use that awareness to expand their comics reading experience. However, as Aaron alluded to, women are not socialized to comics in the same way men are and this certainly gives them a unique, and often more objective, perspective on the medium. I was saying amen the whole time you were talking about this. Bravo and Brava!!!!

Still working my way through the podcast (my commute is only 20 minutes, sorry). Just dropped by to say as someone who found Buffy only after I graduated from college, it’s still worth getting into the series. Like many latecomers, I find I like the later seasons better, probably because I wasn’t a teenager when I watched the earlier ones.

Yes, the first three seasons are set in high school. If the first six books of Harry Potter taking place in a boarding school turned you off, then that would be a good enough reason to avoid Buffy. Otherwise, there’s still plenty of meat on the series even if you’ve been out of school for a while.

And yes, the dialogue has style. Joss Whedon is as distinctive as Aaron Sorkin in how they like to play with language. They play different games, but those games show up again and again in their work. If you want to check out a standalone work of Whedon’s, watch the supervillian webmovie Dr. Horrible’s Sing Along Blog. It streams on Netflix and is available in full on Youtube. As for Buffy, it is available on Hulu and streams on Netflix. Angel (the Buffy spinoff) and Firefly are both also highly recommended.

As always, enjoyed the webcast. You guys pick good guests.

I'm a big fan of Joss Whedon's Buffy, but I came into it in my 30s (season 2 because until the 2 parter where Angel went bad Buffy was on opposite Ally McBeal... my loss!), so no, you don't have to have been in high school when the show came out to appreciate it. (It might leave a stronger resonance in you, but it isn't necessary.)

Your blog is outrageous! I mean, Ive never been so entertained by anything in my life! Your vids are perfect for this. I mean, how did you manage to find something that matches your style of writing so well? Im really happy I started reading this today. Youve got a follower in me for sure!

Good to know someone I could share my ideas. Looking forward to know and learn some more from you. I'll be glad to share my own thoughts to you soon.