People tell me I'm white, and I believe them, because I own a lot of Jimmy Buffet albums

As most anyone who follows comics knows, a major area of debate and speculation is the issues-vs.-collected trade/graphic novel issue. What's better for sales? How does each format affect the creators' approach? Can a series be fairly evaluated in individual issues when the reader has limited information? What's most fun to read? Would the culture of Wednesdays die if pamphlets did? And wocka wocka, etc. In general I can go either and/or both ways, as I love reading whole stories at once as much as I love the suspense and anticipation of new stuff every week. But this week, a few measly panels in Wolverine #67 convinced me of why, while some stories may lose some of their momentum and cohesion in individual issue form (coughgrantmorrisoncough), we can never let monthlies die: 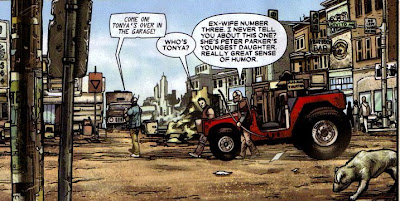 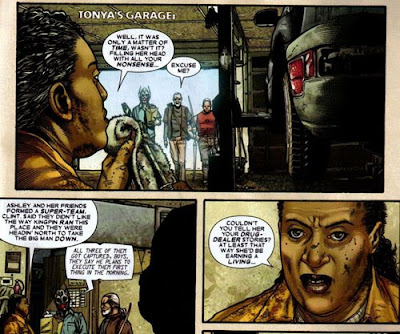 If you're reading this series, you know that this is the second issue in an arc that takes place 50 years in the future--in some catastrophic event around our current time, the supervillains kicked the crap out of the heroes for good and now rule the U.S., which has regressed to some kind of Wild Westish scenario. Something terrible happened to Wolverine in that old conflict, so terrible that he hasn't popped his claws since and is now an avowed pacifist with a family in Sacramento. He's also dead broke and can't make rent, so his old buddy, a now ancient and blind Hawkeye, hires him to accompany him on a delivery road trip of as-yet-unknown purposes. Along the way, we learn in the panels above that Hawkeye has been married at least three times, and that his third ex-wife is Peter Parker's youngest daughter. And we meet her. And she's black.

This is the second to last page of the issue, and the concern is for Clint and Tonya's runaway daughter, and Tonya's race is not addressed nor would it make any sense if it were. The fact alone that she's black doesn't make a tit of difference, of course, but that one visual decision is sort of a stroke of storytelling genius on Mark Millar's part. By making Spider-Man's future daughter half African American, Millar isn't just saying "Peter slept with a black chick"-- he's saying "You think you know what happens in the Marvel Universe? You don't know shit, and I'm building a universe that you can and should have big questions about."

Now of course I'm not saying that it's some kind of crazy shocking idea that Peter Parker would have fathered a child with a black woman, after all the answer could be as simple as revealing that he manages to get together with the current object of his secret lust in Amazing Spider-Man (Harry Osborn's girlfriend Lily Hollister). And maybe there is no answer--maybe Millar will leave it open as a non-issue. But no matter how progressive or "color-blind" readers may claim or hope to be, there's no way Tonya doesn't register as a "hrr?" And Millar knows that, whether he chooses to make a story of it or not. Part of me hopes he doesn't, because then it's like "oh did you think that was going to be important? Why the hell do you care?"

But the truth is, if Tonya had been white, I probably would have assumed that her mother was Mary Jane or some other random Peter Parker girlfriend, or I wouldn't have cared or thought about it at all. Now, because I can't help thinking about it, I'm nudged to think about other things--who survived the epic battled and who died? Peter obviously didn't die at that point, where is he now? Were he and other heroes fundamentally changed like Logan? This future society seems to have regressed to an earlier time physically and economically--have social attitudes rolled back as well?

And this, to me, is where the value of releasing 22 pages at a time comes in (in case you thought I forgot what I started talking about). If written poorly, an individual issue of a series doesn't stand well out of context and needs the books on either side of it to work. If written competently, an issue in a series makes sense on its own while fostering anticipation for the next installment. And if written brilliantly, an individual issue will leave you satisfied and surprised and up to speed, while also letting you know that you potentially have a whole lot to learn--maybe everything is as it seems, maybe it isn't, but you have a nice long time to take it all in. And if you wanted to take it all in tonight before you go to bed, tough shit, you have to wait. But you'll appreciate it more when you do.
Posted by Evie at 10:13 PM

I just discovered your blog and think it's fun but the use of the word 'pamphlets' is a red flag to a bunch of comic buyers. It's usually used in a derigatory sense, along with 'floppies', and I've discovered I'm not the only guy who stops reading something once we see that word.

Welcome! And basically, I used "pamphlets" because I was looking for synonym options so I didn't have to say "individual issues" every time. I've seen pamphlets used in pretty straight-ahead news stories written by comics people, so I wasn't thinking of it like that at all, and believe me I mean nothing derogatory with it (as the main point of this post should demonstrate). But thanks for the heads up, I can be clueless about such things--in fact I'll change it so no one is led astray.

Excellent post, Evie. I'll be honest that on first reading, the whole "Peter's wife thing" didn't really cause me to pause and think about what I was seeing. But now that you raise the point, I basically had all the same questions as you about the larger story and history of the world, though it was from a different angle.

I was a bit focused on Hawkeye being blind, being a drug dealer and killing guys like it was as simple as breathing. He's one of my favorite characters and his circumstances made me super curious about what's he's gone through to be the person depicted in this story, which is a pretty dramatic departure from the Hawkeye I'm used to.

Kudos to Mark Millar for making me think a bit more outside the panels of what's been depicted and restoring some of the faith I had lost in his storytelling abilities. Old Man Logan has been a very entertaining read thus far.

Anyone else feel like Wolverine is the package Hawkeye is supposed to deliver? :)