This episode of Awesomed By Comics is brought to you by just the best most beautiful laptop ever, yes you are we love you so muchy much, you have no reason to ever get mad at us and not work when we're trying to record the show again, no you don't, you're just so perfect and hot, by the way have you lost weight? We LOL at X-Factor, have a sadz at the end of Ms. Marvel, and hype the skillz of Gail Simone, Matt Sturges and Joshua Dysart for Wonder Woman, The Web and Unknown Soldier, respectively. We also talk about Dwayne McDuffie's killer new Justice League: Crisis on Two Earths animated Timmverse movie, and wonder what possessed James Robinson to get so freaky in Superman. Also, Warren Ellis writes a parody of a Warren Ellis comic, and Aaron thinks it's totally awesome.

(An apology, while we're all here: in the show I note that Aaron Lopresti was the penciller for Wonder Woman, but it was in fact Chris Batista and Fernando Dagnino--it's miscredited on the cover, someone at DC did a cut-and-paste.) 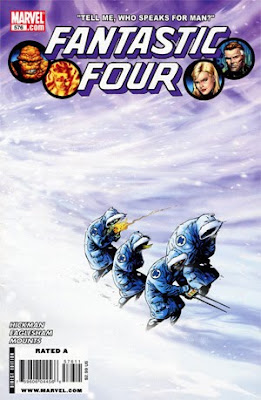 Aaron's pick, from Thor #607, variant cover by Mico Suayan (plus whoever drew the squirrel, I'm not sure? Any help here?): 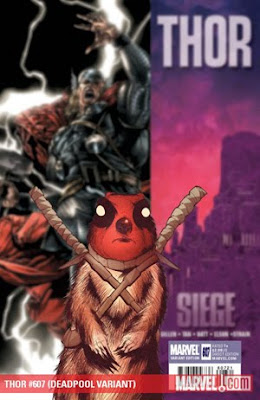 Aaron's pick, from X-Factor #202 by Peter David and Bing Cansino: 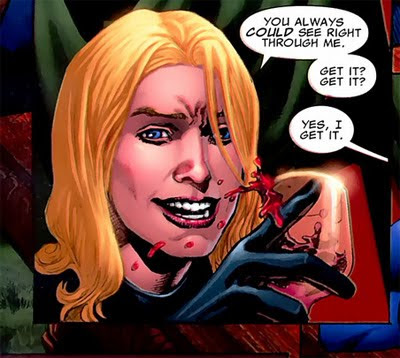 Evie's pick, from X-Factor #202 by Peter David and Bing Cansino: 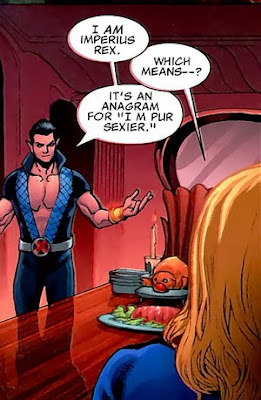 Aaron's comment about reading DCBS ad copy is dead on. I listen to other comics podcasts and every time they start into an ad I wonder what content they're offering compared to you folks and WRA that makes tolerating the ads worth it. The answer is that there is none.

I'm on the same page as Evie vis a vis the "Runaways" movie. The book sweats cinematic potential on a cold day, but there's always the possibility for things to go horribly wrong even with creator involvement. Just look at the "Johnny Mnemonic" flick; Gibson wrote the screenplay for that turkey. Worrying about stuff like that is just part of caring about a title.

Finally, a question: why don't you two ever give "Scalped" any love? Are you reading it trades? Not reading it all? What gives? It's ridiculously good and this week's podcast is yet another where a new issue went sadly unmentioned.

The team that Aaron is describing as the original X-Factor is actually the original X-Force (which I guess means that X-Force could also be re-numbered eventually). The ORIGINAL original X-Factor was a reunion of the original X-Men back when Claremont's X-Men was entirely new characters (that's the one they're reviving in "X-Factor Forever" with Louise Simonson, who wrote most of that team.) The X-Factor that the current team is more related to took over that book after the founding members rejoined the X-Men. It was a government-sponsored team led by Havok and Forge and included Polaris, Strong Guy, Wolfsbane, Quicksilver and Multiple Man, and the initial period was written by Peter David. There was also another X-Factor team in a miniseries, unrelated to either of those. Basically, Marvel has a bunch of decent team names for peripheral X-teams that it wants to keep trademarked (X-Force, X-Factor, Excalibur) but they've had trouble keeping any of the teams they've come up with successful for very long, therefore X-Force has been used for 3 totally unrelated teams, Excalibur for 3 and X-Factor for 4.

Thanks Ethan... in light of this correction, I'm really glad Aaron took a moment to compare his "encyclopedic knowledge" of Marvel comics characters to mine on this week's show :).

And Baltimoron--yes, we have dropped the ball on Scalped. The deal is that we didn't really know about it until it was way in, and then we bought a trade, and then we didn't get around to reading it or maybe Aaron did but the point is we have not caught up. So it's not that we're not choosing it because we don't like it, but because when you can't physically read everything in the world, some things fall between the cracks, even things that everyone says are awesome.

Also, I once heard an interview with Jason Aaron on another podcast, and someone asked him about how much research it must have taken him to understand the lives of Native Americans to write a book like Scalped, and he was like "I don't know I just kind of wrote it." Now, he may have been joking, or it was out of context, or I missed something, but that kind of seemed off and impossible. Don't get me wrong, I love Jason Aaron, he's a fantastic writer and he's someone who probably could just do that, but I think it contributed at that moment to me not running out and buying every issue right away.

As I have said before (probably on the show, but maybe only in real life) I do have an encyclopedic knowledge of lots of stuff, but my encyclopedia is not in any discernable order, nor does not have an index. So whatever page I happen to turn to, that's the information you get. It was actually New Mutants I was thinking of, not X-Factor OR X-Force.

Also, just a crap of the week addendum - I was vaguely familiar with Wing, from a couple of Astonishing X-Men issues, but I assumed he went back much further as a character, given the apparent depth of his relationship with Armor. However, according to Wikipedia, he did not. That handful of issues are the only ones he ever appeared in. So I didn't know 'who he was' because he was only in two or three issues ever.

Oh and also also about Scalped - I do have, and did read, the first trade - but I wasn't blown away by it. At the point I read it, it would have taken a significanly higher investment in both time and money to catch up with the series than it seemed worth. So a few questions to scalped readers - has the book gotten stronger as it's progressed, and is the first trade not really indicative of the quality of storytelling Jason Aaron has used more recently?

And is there a recent arc that would make a good jumping on point?

Anyone else kind of irritated at how the last 2 issues of FANTASTIC FOUR have ended with a text page explaining how the story ended? It's almost like a 30 page story got cut to 22 at the last minute.

And as someone who's familiarity with James Robinson comes mainly from STARMAN it was kind of funny to hear you talking about how he seems like such a mainstream kind of writer. As far as his current work goes you're right, but his STARMAN was such a non mainstream super hero book. I think you'd both love it so you should give it a read. With the hardcover books now out you could probably get the trades for cheap on Ebay.

Book of the Week- GI JOE-COBRA #2. Yeah, the idea of a "mature" GI Joe book is kinda dumb, but thety manage to make it work. Plus Chuckles is a main character which I like because as a kid I always gave him a big role when I played with the toys.

I came here to point and laugh about the Wing comment only to find you've already copped to it. Darn it! Darn it!

Anyway, I find it amusing that everyone hated on All Star Batman but no one will say about bad word about Batman & Robin just because it's written by Grant Morrison.

Good to have you back. Not to be a stickler but the Fantastic Four cover was by Alan Davis.

I'm pretty sure BKV isn't just involved in the Runaways movie but actually writing the screenplay. Don't know if he'll have any say in casting, frankly, I highly doubt it.

As for Scalped I thought it started out pretty well but I'd say it definitely gets better as it goes. I wasn't blown away by the first trade on my first read but after revisiting it months later with perhaps slightly lowered expectations, I ended up really enjoying it. I felt he last 6 issues were close to perfect but they do build on what came before so I'd recommend getting all the trades. Issue 35 is a stand alone issue though that is completely unrelated to anything else so you can also just read that issue for a taste of what Jason Aaron's skill these days.

And you're right, no one is reading The Web and Bendis does need a kick-ass eye patch.

GAHHH WHAT IS WRONG WITH MARVEL WHY CAN'T THEY CREDIT THEIR COVER ARTISTS PROPERLY I LOOKED EVERYWHERE IN THE STUPID BOOK. Ok, sorry everyone, I will fix.

Are you guys reading Atomic Robo? The first issue of the new series came out the week your computer blew up so it's possible you guys spent an hour and a half talking about nothing but Robo (which you should!), but if you aren't reading it you very much should be as it is pretty much everything you could ever want in a comic. It has Robots and fake science and is absolutely hilarious (I think it's funnier than Incredible Hercules which is saying a lot)! What more could you ask for! Anyways, if you aren't reading it you should. I'm pretty sure you both would love it.