Thanks to alert listener/reader Albertosaurus R3X, we saw that on March 2nd, the website Superhero Hype posted the news that Iron Man, Armored Adventures, has been given the greenlight for a second season.

This show was both Evie's and my comic-related non-comic item of the year last year. Despite efforts to each pick something or someone different, neither of us could bring ourselves to choose anything other than this amazing show.

The computer animation did get a bit clunky at times, but that was the only slight on an otherwise perfect season. From design, to plot, to script, the show was masterfully crafted. Iron Man, Armored Adventures is a reimagining of the Iron Man legend, with all of the comic's major players recast as high school classmates. And as far as execution goes, this show has some of the best voice acting I've ever heard in animation, and I've seen a LOT of animation. But above all, this show was flat-out, balls-to-the-wall FUN.

Yes. Balls-to-the-wall. That is what I typed.

I haven't heard a lot of other comic book people talk about this show, either on podcasts or on blogs, so scrolled down to the comments to see what people had to say, expecting a lot of HOORAY!s or EXCELSIOR!s. Instead, I saw this.

Posted by: Animatorz!! on March 2, 2010 at 12:10:30 Renewed.....uh, why? The show largely sucks(and this is coming from an Iron Man fan). I wanted Iron Man done more in the flavor of the 90's Batman or Superman TAS's(you know, a really good show that's pretty faithful). Not Peter Parker as Iron Man.

Posted by: Marvelfanwithgoodtaste on March 2, 2010 at 13:25:52 OMG why? The whole series is like Spiderman New TAS but without good script!!! We want Wolverine & The X-Men Season 2 NOW!!!!!! We don't give a damn about Armored Adventures and yes, they are as good as Spectacular Spidey is. Not-good! Extremely childish, even for a child!!!

That second comment goes so far as to insult Spectacular Spider-Man - which was, for its two seasons, possibly the best adaptation of the Spider-Man mythos into ANY non-comic medium, ever. Like IMAA, Specacular Spider-Man was bright, it was fast, it was colorful, and it was FUN.

And yet, it is rejected by comics fans.

And it's not just the fact that it's not the "real" Spidey - Ultimate Comics Spider-Man sold 43,622 copies. The Marvel Adventures version of Spidey is absolutely the equal of the Ultimate Comics version, which is to say they're both fantastic. But it too is rejected by comics fans.

We at Awesomed By Comics have long been fascinated by the need for most comics fans to pointedly and usually blindly reject anything related to their beloved funnybooks that's ... you know, too funny.

Or fun. Or that could in any way be interpreted as being aimed at, or even appreciated BY, younger people.

Is it something that has seeped in from the 'cartoonists' scene, where great lengths are taken to shun whimsy (...unless you consider tragic melancholy to be whimsical.Read Douglas Wolk's chapter on Chris Ware in 'Reading Comics.')

Is it a cost/benefit analysis thing? Does a $3.99 crossover story with a ton of decompression that takes 15-20 minutes to read but only moves the story ahead by a few minutes feel intuitively like a better investment than a $2.99 Marvel Adventures book that takes 5-10 minutes to read, but is relatively self-contained? Does an hour spent watching two episodes of Iron Man Armored Adventures feel more wasted than an hour watching Smallville or Lost?

Or is it the pure stigma of comics having been traditionally viewed as FOR children that forces fanboys - and it is generally only the boys that have this problem - to PROVE (to themselves?) that comics are legitimate by rejecting anything a child could enjoy? Comix R Serius Bizness, etc.

Probably, yes. So I am going to say this, right here, in print, so that we are actually forced to follow through with it. (We've been talking about it for more than a year)

We're going to put together a panel discussion with some of our favorite critics and creators from the comics world to explore where this loathing of fun comes from - and whether it's killing off any chance of superhero comic books (not the characters, the books themselves) regaining a cultural foothold among young people.

There. I said it. Now let's see if we can actually do it.

Also I'm hiding this picture of Mr. Kotter here, because I'll probably need it for a joke next January. 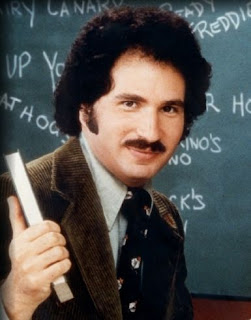 yay made it to ABCP!! (kinda..) I've been reading marvel adventure spider-man from you guys's recommendation on the year-end show. I agree this is a smart comic book.. I will have to check out the marvel adventure superheroes next...

INteresting axe to grind, ABC....interesting indeed! O.o *waits to see how this will unfold*

I absolutely agree. If it's fun and clever comic fans will absolutely reject it. I still don't understand why Incredible Hercules wasn't the number 1 title at Marvel.

I don't think it's the hatred of fun, but rather the fact that these comics don't have an impact. In your example of the Spider-man books, it shows that Ultimate Spider-man does sell lower than the regular Spider-man books. That's because I believe there is a believed importance to the events in both those titles that is absent in the MA line.

In 616 and Ultimate Universes, there is a regular line of continuity. There is progress, or at least the facade of progress. There is a compulsion that if you miss one installment of these series, you are missing out of a much larger picture and development that is being formed.

Just look at the other Spider-man titles that were released. Web of Spider-man sells have of what Ultimate does, and the various mini series and Alternate Universe stuff sell even lower. In the end, there is a need to collect those over MA, since feels like nothing is happening.

There's also a bit of a marketing issue. I don't read any of the Spider-Man books right now (though I'm enjoying SSM a whole lot) but it seems like the Ultimate version is also seen as more "fun" and yet sells much more than MA books. In part I think this is because the MA logo is felt to specifically denote comics directed at kids. It's been mentioned a couple of times by Paul O'Brien on House to Astonish that the "First-Class" books and other 'Marvel Adventuresish' stuff not under the MA imprint seems to sell noticably better than the MA books themselves, which is interesting.

There are literally tons of books written for young adults and younger that are arguably well done. Dav Pilkey's Captain Underpants series, the Powerpuff Girls cartoons and books, Barbara Park's Junie B. Jones books -- but why read them instead of material written for adults?

I don't see the point of reimagining characters created as adults, and doing them as teens. It's treating the character concepts like Silly Putty, or like brand extension. If you like Cheerios, you'll love Chocolate Cheerios.

If a child can enjoy a cartoon or comic, there's probably not sufficient content to entertain an adult.

"If a child can enjoy a cartoon or comic, there's probably not sufficient content to entertain an adult."

Stephen, if this is truly how you feel then I genuinely pity you. If you feel you can only enjoy things that you feel are worthy of an adult such as yourself then you're missing out on a lot.

No one's saying that any adult should should only consume media aimed at children, but if someone wants to watch BATMAN: THE BRAVE & THE BOLD or read DIARY OF A WIMPY KID (which I haven't read, but from what I've seen looks fun and clever) in addition or even as an antidote to more serious and "mature" books and TV shows I don't see any problem with that.

Stephen, if this is truly how you feel then I genuinely pity you.

I'm honestly puzzled by that. The fact that comics aimed at kids have nice-looking artwork doesn't make the actual content more entertaining for adults, in a general sense -- and I doubt that more than a minuscule percentage of the adults who read adult novels read YA or younger books for entertainment. If a book is written for certain grade levels, the limits on the vocabulary will make the text uninteresting.

There's something to be said for reconnecting with one's childhood occasionally, but in my case, reading material written primarily for kids (as opposed to all-ages material that works on multiple levels) would be a waste of time.

"There's something to be said for reconnecting with one's childhood occasionally, but in my case, reading material written primarily for kids (as opposed to all-ages material that works on multiple levels) would be a waste of time."

OK, but that's completely different from what you said in your first post where you said anything a child can enjoy (which would include all ages works) isn't worth any adults time.

I would argue that a great deal of "kids'" material these days, across cartoons, movies, books, comics, etc., is being done with an "all ages" sensibility in mind. Meaning that children can and do enjoy them greatly, and so do adults, because there are visuals and content meant for both--which by the way is not mutually exclusive. I certainly consume a crapload of stuff "aimed at kids," which means appropriate for kids but that parents can get a lot out of (and I am not yet a parent--I just appreciate a lot of the fun kids stuff that is pitched with an extra level of maturity that children do not have to get to enjoy the media. Sometimes this is better than stuff "aimed" at adults, because it includes wonder and absurdity that supposedly only kids like).

I think CS Lewis said it best (in a quote which every comics or fantasy reader should keep handy): "When I was a boy, I read fairy tales in secret. Now I read them openly for 'when I became a man I put away childish things,' including the desire to appear quite grown up at all times."

(ironically, my verification word is 'logicali')

I'm not blindly rejecting lighter fare, I'm just not interested in it. I don't think that being interested in the flagship Amazing Spider-Man book necessarily guarantees that I'd be into the Marvel Adventures version. They're very different types of books that happen to feature some of the same characters.

Equating MA Spidey with Amazing Spidey is like equating The Dark Knight with Batman: The Brave and the Bold. The two have absolutely nothing in common except a character or two. There's no mystery there.

It sounds like you might be proposing that the fun, lighthearted, cartoony mode of the MA books is the "default" version of Spider-Man, the truest version, and that's a completely different can of worms. It just boils down to personal preference, and while especially on the internet I think you'll find a lot of folks that feel that way, I think most people in general will agree that a Spider-Man book where something like the death of Gwen Stacy or Kraven's Last Hunt couldn't happen isn't a book that's true to the character.