This Halloween episode of Awesomed By Comics is brought to you by the combined forces of Lord Byron, John Stamos and the undead. Major awards this week go to the adorable Ultimate Spider-Man, the super duper adorable Hellboy/Beasts of Burden one-shot, the fierce and surprising Amazing Spiderman, and Tom Fowler's portrayal of Chris and Euge in Deadpool Team-Up. We talk about "Red," the movie that has about as much to do with the comic it was based on as this one does, and alert you that at least one of us will be out of town for the next two weeks, but we'll have at least one special thing with which to hold you over in the mean time.

Evie and Aaron's pick, from Hellboy/Beasts of Burden one-shot, cover by Jill Thompson: 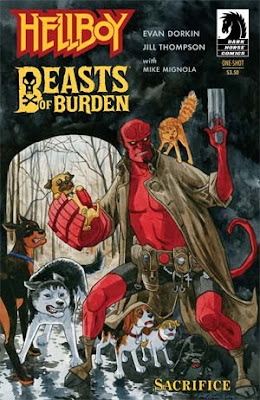 Panel of the Week

Evie and Aaron's pick, from Deadpool Team-Up #888 by Cullen Bunn and Tom Fowler (panel starring Chris Sims and Eugene Ahn of War Rocket Ajax and some other things):

Email ThisBlogThis!Share to TwitterShare to FacebookShare to Pinterest
Labels: ABC Podcast, Aminals, Cover of the Week, Hellboy, Panel of the Week, Spider-Man

(i was really hoping someone would notice...)

What I declare crap of the week. The Movie Priest. The reason why, it says based off the graphic novel (It's a Korean Comic) but much like RED, it has little to do with the book, only RED stuck closer to the the book then this up coming movie.
Here are the only things related to it.
1) the title
2) Main character's name
3) Main character has a cross on his face (but even that they mess up.

I'm not joking, read the Wiki page on the book and then the movie.
Comic:
http://en.wikipedia.org/wiki/Priest_(manhwa)

I know not every comic movie will stick close to the what it's based off of, but good lord. If they are going to deviat that far from the story, why not just change the characters name and drop the "Based on " so you can have a *gasp* Original Movie. The last time this kind of thing was done, we got Final Fantasy: Spirits Within.

I liked the Mignola cover even more, never thought I'd see him draw a pug!

Man, I hated what Winick did with Ice. Could just be confirmation bias, as I hated the very idea of making Ice a "tragic" character when it was first announced. (So much so that I wrote a whole article about how dumb it was: http://www.weeklycrisis.com/2010/09/ice-unleashed-unnecessary-change.html)

I can't help think while I am reading the Batman Beyond seriies that this is a pretty close copy of the Redhood concept.

Another back from the dead sidekick that feels shafted by bruce wants to take revenge and then run Gotham his way.

I used to hate Halloween, mostly because it was one of those holidays for kids who had friends. Having a kid of mine own has kind of helped me like it again, though.

But yes, like Evie said, she is a hot older woman.

Wow. This was SUCH a hectic week and had to listen to the podcast in multiple parts. In the little bit of downtime I had just NOW I finished the 'cast while reviewing a calendar at work. Then I got to the haunted pasta part and laughed out loud to the surprise and awkwardness of all my office mates. Man, THANKS SO MUCH. I so needed that.

Great podcast, as ever - hope the couple of weeks away proves fruitful and even restful.