This episode of Awesomed By Comics is brought to you by Andy Partridge of XTC and the band's seminal 1980 album "Black Sea" produced by Steve Lillywhite, because we're testing a theory. Major awards this week to X-Factor #210, Morning Glories #3, Hulk #26, Loki #1, creative business models, and one of Aaron's asinine conspiracy theories. Warmest welcomes to anyone listening for the first time thanks to Evie's appearance on iFanboy this week; please feel free to go back and listen to as many archived episodes as you'd like, regardless of whether Aaron thinks that's "weird".

Evie's pick, from Batman Beyond #5, cover by Dustin Nguyen (UPDATE: During the show we weren't convinced this cover was by Dustin, but I found it on his Deviant Art page, so it is confirmed. Sorry for any confusion or stupidness!): 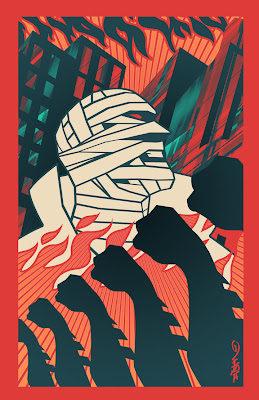 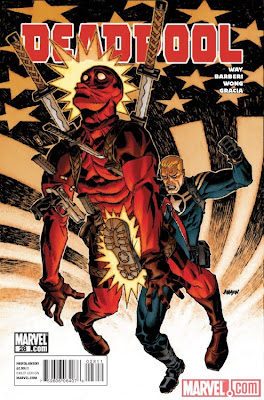 Aaron's pick was from Power Girl #17 by Judd Winick and Sami Basri: but instead here's Mockingnerd's awesome Fin Fang Foom:

(Seriously, one of you pros who listens to the show, put this gal on a two-pager in something.)


Evie's pick, from Hulk #26 by Jeff Parker and Gabriel Hardman:

Oh, and also you guys should probably see this too.

Stephen Seagle was the writer on Sandman Mystery Theater. He also did X-Men and Alpha Flight during the mid 90s, around the Heroes Reborn days, I think.

If it was 4chan it was definitely the whole thing. They post every single comic every week.

the CSA (huh, whadda you know, the acronym for another evil organization) Superwoman is both that Earth's Lois Lane and the Wonder Woman equivalent, I'm not sure how she's supposed to have gotten her powers or if they've ever shown the CSA world's version of the Amazons (what is that Universe called now, pre-Crisis it was Earth-3, then I think it was the Anti-Matter Universe, I'm not sure if it's even supposed to exist now.)

In Post-Crisis continuity, as established in the 1998 graphic novel JLA: Earth 2 by Grant Morrison, Superwoman (and the rest of the Crime Syndicate) comes from a parallel world similar to Earth, but located in an antimatter universe (also home to the planet Qward).[11]

Superwoman continues to make occasional appearances as a member of the Crime Syndicate, most recently appearing in storylines in the Justice League and Superman comics. Unlike her pre-Crisis counterpart, her magic lasso doesn't change shape, but releases the inhibitions of anyone tied with it (just as Wonder Woman's compels victims to tell the truth). She also possesses heat vision, as Superman and Ultraman do.

Taking the alias Lois Lane, Superwoman is an Amazon by birth, and has risen through the ranks to become the chief editor of the Daily Planet in what she calls "Patriarch's World". This disguise resembles Wonder Woman's secret identity of Diana Prince. At the Planet, Superwoman is shown to upset her colleagues; the antimatter-Cat Grant refers to Superwoman as "Queen Bitch",[12] and negatively alludes to her "friendship" with the antimatter Jimmy Olsen.

Jimmy Olsen is the only civilian who knows of Superwoman's secret identity. A compliant sexual deviant, he does what she tells him in exchange for the favour of watching when she changes her outfit and receiving pieces of it for his "disguise kit". He is so besotted that he ignores her gibes and insults, even when she tauntingly refers to him as, "Superwoman's Snitch, Jimmy Olsen," and prints it in the Planet.

Also in the Earth 2 story, her lover Ultraman hates Superwoman's frigidity towards him. Meanwhile, she is carrying on a torrid affair with Owlman, and they sneak trysts whenever they feel Ultraman is not watching. However, from his floating fortress (the antimatter counterpart to the Fortress of Solitude), Ultraman doesn't hesitate to fire warning bursts of heat vision towards them whenever he catches them together.[11]

I wish I had the image, but my Panel of the week goes to Supergirl issue (I can't remember)
But it part of the Bizzaro World story.
Where they show the Bizzaro JLA, and in the corner, you see Bizzaro Red Arrow/Arsinel (sp?), and he has a quiver of dead cats...

Let that sink in. A quiver of dead cats.

I saw that and flipped out laughing. That was too awesome. Did you guys read it?

Also, Aarron, since you like Peter Milligan, you should check out his Hellblazer he has been doing. It's been some great stuff with really good art. You can start with Hellblazer: Scab and go from there, because he has this great over arching story with John and this young alchemist girl that has the hot for him, but John is trying not to get her involved in his life. Great stuff.

I am just jumping into the podcast and I decided to randomly hop to episode 84. I must say; Thank you for summing up my exact thoughts on Batman & Robin.

My favorite dialogue into title card gag was from Waid's Fantastic Four, in which Johnny is made executor over the FF's financial department. The last line of dialogue is Sue telling Johnny "Don't screw up", and at the bottom of the page, it reads "Next issue; Johnny Screws Up!".

It's sadly gone from the collections of that story, but whenever I read the singles that sequence always makes me laugh.

In addition to JoeDComp's recommendation of Peter Milligan's Hellblazer, I think that Aaron (and the rest of the ABC listeners) would like one of his older graphic novels, Skin.

Skin was by Peter Milligan and Brendan McCarthy and is about a 70's skinhead who has birth defects due to thalidomide. It came out in 92 from Tundra and while it's hard to find, it is very much worth the hunt. Great 90's indie comic.

Fun episode as usual. Aaron, it was good to hear you gave Shawn Pryor's PKD Media Black Box a try. Normally the episodes are much tighter (around an hour or so), but Shawn had recorded three lengthy segments recently and wanted to get them all out before they got too dated. Hence, the marathon episode.

Steve Seagle, in addition to the stuff Matt mentions in the first comment, also wrote The Crusades, a Vertigo series that just recently came out (through Image) in two oversized hardcovers.

He's probably best known as one fourth of the Man of Action team. Man of Action are the creators of the enormously popular Ben 10 cartoon series (and more recently Generator Rex). The other members of Man of Action are Joe Kelly, Joe Casey and Duncan Rouleau. All four guys essentially get to make comics they love without having to worry about the economics of the industry thanks to the enormity of the Ben 10 empire.

THAT'S where I know him from. Good call.

Fun episode as usual! I look forward to your show each week. I listen to ABC, 11 o'clock, and ifanboy to keep me up to date, even though I don't buy comics weekly.

I can't wait to get the post-Conner Power Girl stuff in trades. Seems to take DC forever to get them on the market.

1) I started in on ABCP right around whichever episode came just after the WRA shoutout from their episode ~8-9. I then went back and listened to every episode from 1->then.

Aaron is correct. I am weird. This is one of the least weird things about me, though. I also very much enjoy hearing talk about cats, as well as the tangents when the show goes wildly off the rails.

2) It didn't really click in my head (I had figured it out but not in one big thought) until you guys were discussing Euge's business model. It works, because it's been successful in widespread use in the last decade or so.

It's the webcomics business model! Produce free content, and then once that has proved popular, sell physical collections and related merchandise.

Euge has made a couple of (smart) changes, given his medium. The TrackLog stuff is not fully produced/mastered (saving time), and the stuff sold isn't what's available for free (giving a good reason to buy).

So, yeah. You guys are great.