This episode of Awesomed By Comics comes to you from Cacapon (Ka-KAY-pon) State Park in Berkeley Springs, WV, where we came for vacation, went home and came back again. The big winner of the week is the fourth issue of Joe Kelly and Max Fiumara's Four Eyes, which we've waited 13 months for; other good showings come from the family of Spider titles, The Boys, Birds of Prey and Heralds (HER-alds). We also have a good chuckle/tsk at DC's pitch-perfect ironical racial stereotyping. Apologies for any wonky sound quality, as we are sharing a mic on a portable setup in the wilderness that also has WiFi. Also apologies for the lack of Panels of the Week, as we don't have our scanner in said wilderness. Also apologies that this show is two days late, but we on vacation (vay-KAY-shun). 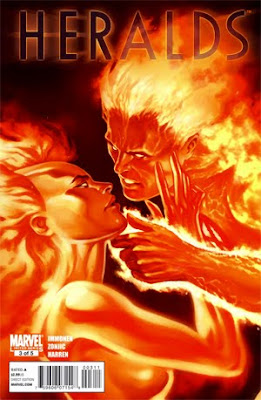 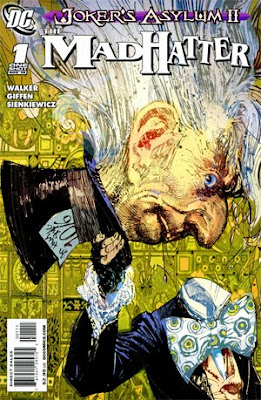 Email ThisBlogThis!Share to TwitterShare to FacebookShare to Pinterest
Labels: ABC Podcast, Birds of Prey, Cover of the Week, Crap of the Week, DC, Joe Kelly, Panel of the Week

I can't believe yr cats can even ride in a car. My two cats last about a minute before they start uttering the most disturbing and tragic meow one could imagine. Thanks for the show kids.

One of them screamed for about half an hour in the car, but basically they get paralyzed with fear and jam themselves under the seat, in realization that no amount of screaming is going to save them from sure death. It's convenient.

Searching for "sound of young america" "holly mills" on the Google yielded this as the first link:

Which also contained a picture of her, leaving me a bit perplexed as to how Aaron could have overlooked it. Found her routine quite funny, and from the image I'd say that she'd make an excellent Scully.

Hang on, is the suggestion that DC are suggesting that black people can't swim, or that they've accidentally tapped into a stereotype that hasn't really made it out of the USA?
Becausethis is beginning to sound like a Chris Rock sketch.

Deworde: definitely suggesting the latter--that they've accidentally, and I do believe accidentally or at least subconsciously, tapped into the stereotype--I don't know how global it is, but probably just a USA thing, yes. That's what makes it comically sad, and not, like, legally actionable.

If we could just amend the word bubble to say "But editing comic books is a REALLY hard job, Maria" then all would be forgiven. Maybe in time for the hardcover.

I don't even think that's a US stereotype. I've heard "black people don't ski" but never that they don't swim.

Of course, that brings to mind the terrible Captain Cold impostor during Salvation Run/Gotham Underground.

Maybe you haven't heard it, but I have and other people I know have, so I promise I'm not making it up :).

Thanks for another great episode. Sorry the vacation got off to a rough start :(

I do believe there was a story arc in Gotham Central that featured the Mad Hatter. He was sort of bad ass if I'm remembering the correct series.

Love the show, but you guys are reaching a little here.

I'm pretty sure you're wrong about the scripting issue. I honestly don't get why it's confusing for him to mention swimming since they are clearly headed to a swimming hole, and talking about the white lantern on the way there. It's hot, which is why she wants to go for a swim, and they’re talking about the reason for the heat as they head there. Doesn’t seem that illogical an exchange.

He can't swim and he's black, but it's pretty clearly motivated by the fact that he's going to be the new Aqualad. Had it been a random black character for whom not swimming wouldn't have a plot purpose, then sure, I could see the issue.

I can only speak for –my- community, but integrating pools and beaches/getting equal access to them was (and unfortunately, remains) a big deal, so waterborne black folks certainly exist in the racist white imagination and have for decades. The "watermelon" stereotype (or any of the other more "classic" racist tropes) doesn't really compare.

Stereotypes don't work by simple repetition; they operate in conjunction within specific discursive contexts and in tandem with other cultural narratives, none of which are operative here. I love you guys but I can’t help but feel like this is a little glib.

As an aside, I can't swim either, but my brother is a competitive swimmer...

Eric,
You're right about a lot of that, and I can see how our reaction could come off as searching for stuff that isn't there. But it was honestly our immediate reaction, without making any extra effort to be snarky--"this makes no contextual sense, and it (probably totally unintentionally) plays off a racial stereotype." Given the editorial controversy that DC has been generating lately, it was a detail that was kind of sadly amusing, if not really all that important or consequential. It struck us this way, so we shared it. But I genuinely appreciate your more nuanced take.