This long-awaited episode of Awesomed By Comics is brought to you by oh hey hello, how have you been in the three weeks since we've done a show? Any graduations, engagements, birth announcements? Really??? That's awesome!!! Yes we are back, after some work travel and music travel and some that was both at once. We unsurprisingly heap unending praise on Spider-Girl, Thunderbolts (except for ONE BAD THING) and Morning Glories, and perhaps somewhat surprisingly enjoy us a lot of Batmans. We also give mad ups to Superman-Batman, which is neither surprising nor unsurprising unless you also read it and know us at all, in which case, duh. There's a discussion about the new Harry Potter movie, and Aaron needs video game recommendations! 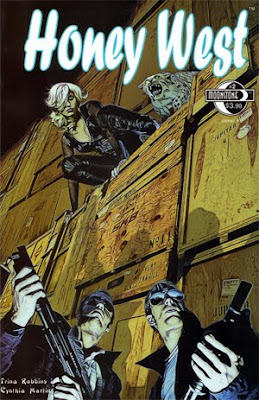 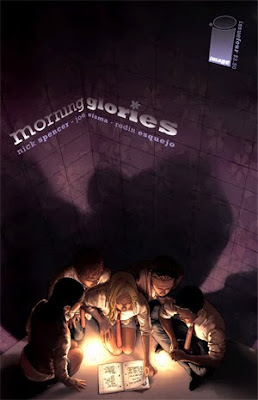 Evie's pick, from Thunderbolts #150 by Jeff Parker and Kev Walker:

Wow, I'm actually convinced to go back to Superman/Batman for the first time in forever.

I'm a geek for saying this, but I distinctly recall there was handheld camerawork in the fifth Harry Potter movie, by Yates, which is still my favorite Yates film. I vividly remember him using it in the Harry/Snape tutorial scenes (and I haven't seen that movie since the year it came out).

I've noticed a couple of times this episode that you describe things as being "awful" (I think the Frog in Thunderbolts is one) and I'm not sure whether you mean it was heartbreaking or that it was badly written ... oh, the Madrox pregnancy thing was the other - was it crap of the week that it happened, or just moving/sad/emotional?

No no, definitely awful as in sad... we clarified that about the frog at the end of the show. And the Madrox thing from last year was one of the best, most heart-wrenching plot twists in recent comics history.

Also, in Spider-girl, there was a camio of Nomade. It was just a small panel where SG waved to her as they passed in the hall.
What I do like about the artist in this book is how he draw's teen look characters, because in the Nomad books, they still looked like Middle school kids in there early teens.

One last things, you guys should check out the two Firebreather books, plus the new one that is out this week. I think you guys will dig it.

I have been having a lot of fun with the Professor Layton games on the DS. There's moderate stylus use, but it's not time sensitive stuff where you have to do the right move really quick or your character dies.

Fire Emblem: Shadow Dragon is a great turn based strategy RPG but if you'd prefer a more traditional RPG experience they ported Chrono Trigger from the SNES and that was a really fun game.

Chrono Trigger is a great choice, but if you played it back in the day there isn't a great reason to play it now. The stuff they added for the DS rerelease arguably makes the game worse. But no stylus, thank goodness. Still, it's one of the best JRPGs ever made. And you don't get random encounters!

Kirby's Super Star Ultra is the best Kirby game, and it's on the DS, so get that if you don't have it.

Word is Sonic Colors is actually a really good platformer, but I'm kinda anti-sonic. But maybe it's up your alley.

I think the game that best meets your description is Mario and Lugi: Bower's Inside Story. It's an RPG, but with lots of actiony elements. It's also hysterical, if a little short.

Oh, and Phoenix Wright: Ace Attorney games are extraordinary. I think you might really dig them, but it IS quite a bit of reading and thinking when you are getting ready to go to bed. I would always play them and end up falling asleep.

Also, my panel of the week was from Batman: The Return. The line is "Selina! I just got back from the dead and thought of you."

For some reason I thought that was HYSTERICAl. I didn't read that amazing Thor line, and honestly when I think about Bruce's line, it's not that funny, but when I read it I loved it. So it must be good.

I would read that book.

A week late, but for DS games RETRO GAME CHALLENGE night suit your needs. It's basically eight 8 bit style games where you have to defeat certain challenges in one game before you can unlock the next. It's fun and there is no stylus use at all.

It just occurred to me:

That's a DS game by the way.