This episode of Awesomed By Comics is brought to you by TECHMOLOGY, the kind that makes you sound like a hamster or a methfreak or a misogynist. In this first episode of twentyten, we cheer Peter David's lovable X-Men-mocking X-Factor: Nation X one-shot, fear Suicide Squad's Amanda Waller and Sweet Tooth's Mr. Jefferts, and jeer the idea that Wonder Woman would make a more logical Star Sapphire than Green Arrow. We also get a visit from a favorite friend of the show, and wax cautiously optimistic about Siege and the end (?) of the Osborn Era.

Aaron's pick, from The Boys #38, cover by Darick Robertson: 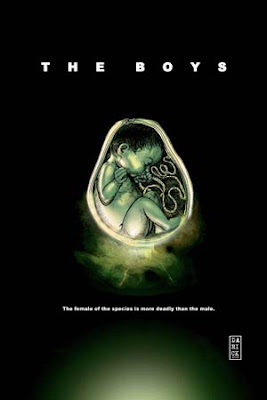 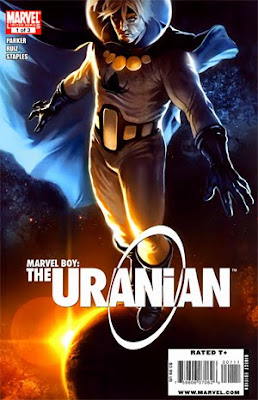 Aaron's pick, from The Mighty #12, by Peter Tomasi and Chris Samnee: 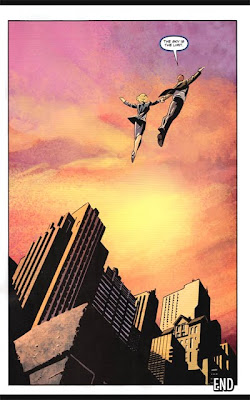 Email ThisBlogThis!Share to TwitterShare to FacebookShare to Pinterest
Labels: ABC Podcast, Cover of the Week, Green Arrow, Panel of the Week, Peter David, Pron, Technology makes me sad in the face, X-Factor

Oh, I hadn't realized that Gail was using the Alkyone spelling of the name. That makes all the difference, as it changes the pronunciation to "moi-she-oof-nik."

Actually, Alcyone and Alkyone are just different spellings of the same name (which is shared among several characters in Greek mythology), but at this point the limit of my knowledge has been reached and I have absolutely no idea if the pronunciation changes between the two.

Wish I could generally comment with more than useless trivia, but I'm picking up all of my comics (except Rucka's run on Detective) in trades these days, so I'm always lagging several months behind you guys. XD

I'd second Evie's panel of the week, though the big splash page right before of the three former villains was enough for me without the response. I'd probably also go with Aaron's crap of the week. I need to spend less money, and that's it for Cable (and possibly all of the X-Books except Jason Aaron's Wolverine and X-Factor.)

If the name has alternate Latinisations as Alcyone and Alkyone, then it's probably pronounced 'k'. There's no Greek letter 'C', you just have Kappa (hard 'k') Chi (looks like an X, but it's some versions of the 'ch' sound or a hard 'k' sound as in 'christ', 'chaos') and sigma or psi for the sibilant sound.

Was Aaron talking over Evie mentioning how he always talks over her intentionally, or unintentionally hilarious?

I just want to say that I am one of those girls who wears tights as pants, but I do it so I can feel like a superhero. Or a supervillain.

Ethan: unintentional, although I did contemplate talking over her during the very sentence in which she said people complain about me talking over her. At least I waited a sentence or two. And I wouldn't have to talk over her if SHE WOULD JUST SAY WHAT I WAS THINKING ALL THE TIME!!! I mean jeez, is it really that hard?

And Yning: Thank you for your service to our country.

Nothing to do with this week comics but thought I show you some interesting new news.

Birds of Prey is returning Spring 2010 with Gail Simone as writer.

WOOT WOOT to that!!

I really enjoyed this week's podcast and completely agree about the Wonder Woman Blackest Night situation. I had my own take on that here-

As I understand it, the problem with C vs. K has to do with Greek versus Latin alphabets, and - oh wait, Ethan beat me to it.

Anyway, great 'cast as per usual. And Aaron, really, don't sweat the year end spectacular. It just sounded like you were overdubbing yourself, which was vaguely reminiscent of the Beastie Boys and not altogether unpleasant.

Now granted, the Beastie Boys are no replacement for Gloria Estefan, Shiela E, Tiffany, Chaka Khan, The Mary Jane Girls, or any number of other 80's sirens, but they're still not too bad.

So hang in there, champ. That invite to join the Miami Sound Machine will be yours someday. Someday.

I actually know someone who owns a Nickelback album.

My girlfriend. I found out while helping her clean her place. As the CD fell from the desk, all I can think about was what you guys said, and it took all my strength not to burst out laughing/screaming.

So that was probably my non-comic related crap of the week.

I dunno. Though Sweet Tooth was good, I don't think it was as dramatic as most reviewers said it was. And, not knowing Lemire's storytelling, I'm guessing that I wouldn't be surprised if Jefferts comes back to rescue him as the hero.

And, some Nickelback songs aren't that bad. I don't know why you hate them so. Although, obviously with both of your backgrounds, you are definitely music-snobs. ;)

First of all, a Phish fan making fun of Nickleback is like a Rob Liefeld fan making fun of the guy who draws Marmaduke. Phish are certianly more technically skilled as musicians, but their music is just as awful only in a compeltely different way.

Cover of the Week- FORGETLESS #2 by Marley Zarcone. Just some very nice artwork.

Villain and Book of the Week- Mr. Jepperd and SWEET TOOTH #5. For the first few issues I thought Mr. Jepperd was up to no good. Then he converted me and I thought he was just a gruff but lovable guy who maybe had his own motives for helping Sweet Tooth, but was genuine in his desire to help him. Then he just turned out to be a dick.

Hero of the Week- Negative Man from DOOM PATROL #6. No real reaon excpet for the fact that I enjoyed this issue and it doesn't fit into an other category.

Trade of the Week- Mrk Gruenwald's SQUADRON SUPREME. I actually read this a few months ago, but it was quite good. It's quite dated in terms of style, but it's a great story and the pace of it is just a complete 180 from the pace of books today. What took place in the first issue would easily take at least 4 or 5 issues to go through today.

Eric: Ha ha BURN. Phish makes my skin hurt too, but I do put them in a different category of pain in which there is more chance of my having other things in common with Phish fans. But still, if Aaron and I ever get divorced, it will be in a Trey vs. Morrissey debacle of some violence.

Today at work I actually spent a good deal of time thinking what kind of people like Nickleback and I came to the conclusion that Aaron's joke about Nickleback fans hating music was actually on the right track. It's not that Nickleback fans hate music, it's that Nickleback's music appeals to people who don't love music. It's music that's enjoyed by people who buy/ download maybe 5 CDs a year at the most and consider music to just be background noise while they're driving/ doing their homework/ washing the dishes etc. In 10 years no one will be saying "I started a band because of my love for Nickleback" because the idea of making music is just the furthest thing from a Nickleback fan's mind becayse mysic just isn't something they think much about or take all that seriously.

And on next week's show it may be the rare week where an actual person is named Villain of the Week because while I haven't read this week's comics I can't imagine any comics villain being as bad as Jay Leno as far as just being a complete dick.

And a Phish fan making fun of Nickelback is more like a hardcore Sam Keith or Bill Sienkiewicz fan making fun of Greg Lang or Greg Horn. Their work is far more complicated and creatively challenging, and also much, MUCH harder to digest, and appeals to WAY fewer people.

And Gruenwald's Squadron is an amazing piece of pre-Watchmen storytelling, that explores many of the same themes. A very good choice that I will make Evie read one of these days. (I've decided not to let her read Infinity Gauntlet -- because she would hate it, and I would take it personally because it's my favorite thing ever.)

All I know is, that a girl I used to work with and had a crush on, was a major Beatles' fan and wrote reports on them, etc., was also a Nickelback fan. I don't know where the Beatles stand in all of musicdom, but she could go off on many rants about their music, but she still loved to hear a Nickleback toon.

"I don't know where the Beatles stand in all of musicdom"

And yes, taste is a weird, wacky, fickle mistress. I could write a long essay about why Nickelback is genuinely appealing to the ears and sensibilities of so many millions while still being a musical abomination, but I don't have time right now and it's hard to do that kind of thing without alienating scores of people in some way or another, even those who hate Nickelback. I think everyone here knows that Aaron and I are pretty big music snobs, though we do have different tastes. At the same time, I love the hell out of some super poppy music and hate some snooty indie rock crap to absolute death. We should all just stick to Gamble and Huff.

on behalf of myself, I appreciate the thoughts Evie. :)